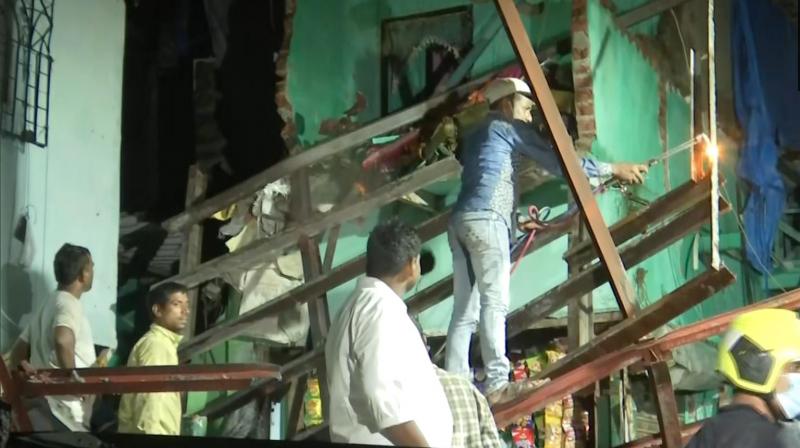 Fire fighter at the site of the collapse. (Photo: ANI)

Mumbai: Five people including a fireman were injured after a four-storey under-construction building collapsed on an adjoining house in the Andheri region of Mumbai on the intervening night of Tuesday and Wednesday.

The fire brigade pulled out the five persons from the debris and had them admitted to a hospital, said the Mumbai Police.

Only five people were present in the house at the time of the building collapse. All of them suffered mild injuries, said the police.

The injured including Akbar Shaikh (60), Chand Shaikh (34), Arif Shaikh (17), Ajra Shaikh (18) are still undergoing treatment at Cooper Hospital. Shamsuddin Shaikh (50) has been treated and discharged from the hospital.

A fireman, Vishwas Dattaram Rahate, who was also injured, has been treated and discharged from the hospital.

The incident happened at Mehta Baba Chawl, Amar Society, Juhu Gully, Near Salami Hotel, Andheri (West) at 00:28 am on Tuesday and was reported by the Mumbai Fire Brigade at 1:30 am.

The Mumbai Police and the fire brigade reached the spot as soon as they received the information.

Debris is being removed from the site and restoration work is underway.