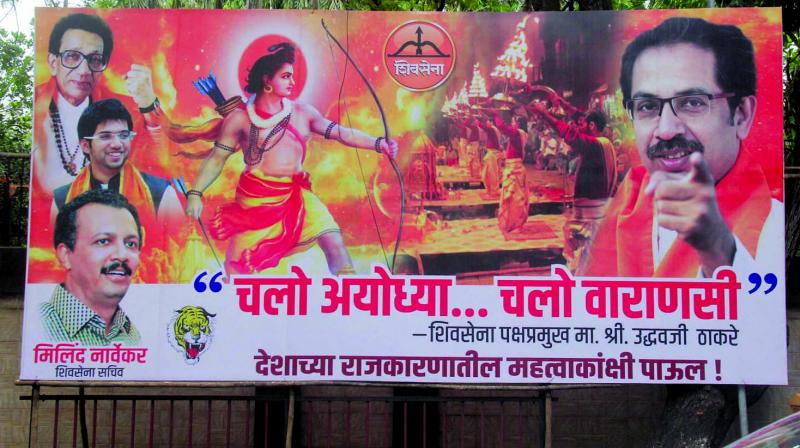 Mumbai: The Shiv Sena has planned to create a 'Hindutva' stir across the country, seeking to corner the Bharatiya Janata Party (BJP) by aggressively raising the issue of building a grand Ram temple in Ayodhya, Uttar Pradesh.

On the occasion of Mr Thackeray's birthday on Friday, his secretary Milind Narvekar put up hoardings in Dadar and Bandra with the call of ‘Chalo Varanasi, Chalo Ayodhya.’ He had expressed his desire to visit Varanasi for ‘Ganga pooja’ and visit Ayodhya for the darshan of ‘Ram lalla.’ With an eye on the upcoming Lok Sabha and Assembly elections, the Sena wants to make the Hindutva agenda a priority to corner the BJP, said sources.

Sena MP Sanjay Raut said that Mr Thackeray may speak on the Ram Mandir issue when he goes to Ayodhya. “It has been more than 25 years since the BJP gave call for the construction of Ram Mandir. The party has come to power twice after that, but there has been no progress on Ram Mandir. We will see if we can carry out kar seva when Uddhavji goes to Ayodhya,” he said. The Sena is also expecting support from organisations like the Vishwa Hindu Parishad, the Rashtriya Swaymasevak Sangh and the Bajrang Dal on the issue.  “After Mr Thackeray recently announced his plan to visit Ayodhya’s Ram Mandir and Varanasi for ‘Ganga Aarti,’ he has been receiving phone calls from Hindutvavadi leaders across the country extending their support to him, said sources. “Many such leaders and workers are ready to join Mr Thackeray” said a senior Shiv Sena leader.

Now, Mr Thackeray wants to take on a leadership role on the Hindutva issue at the national level and has planned his rallies accordingly. The rallies are likely to take place in October-November, said sources.

Taking pot shots at the Sena chief’s proposed visit to Ayodhya, former chief minister Narayan Rane, who is now BJP's ally, said, “Mr Thackeray should wear saffron clothes and go to the Himalayas. It is little ahead of Ayodhya and Varanasi.”

Though the Sena is an ally of the National Democratic alliance, a partner in the BJP-led governments at the Centre and in the state, it has declared that it will go solo in the upcoming elections. Mr Thackeray and Mr Raut have been regularly slamming the PM and the CM.