The car driver who fled from the spot following the accident was arrested Thursday night by Bandra police. 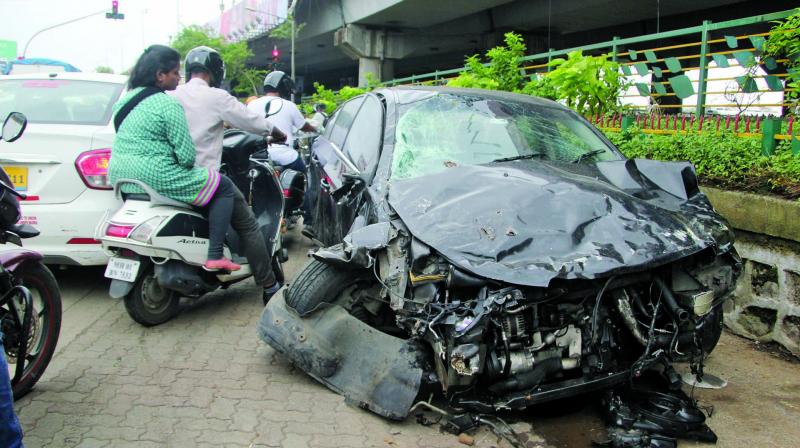 The mangled remains of the car at Bandra Reclamation. (Photo: Mrugesh Bandiwadekar)

Mumbai: In a freak accident that occurred at Bandra Reclamation, two labourers were killed when a speeding Chevrolet rammed into the flyover and hurtled down onto the road Thursday afternoon. The car driver who fled from the spot following the accident was arrested Thursday night by Bandra police.

The deceased labourers have been identified as SandipDaund (26) and LalaBansi (28). Daund was killed after the car came crashing down from the U-bridge at Bandra west at around 2.45pm.

According to the police, Ehtehsham Kapadia, who was driving the Chevrolet in the north-bound lane, lost control and rammed into a stationary tempo after which his car fell off the bridge. While Kapadia fled after the accident, he was identified with the help of documents recovered from his vehicle. The police tracked him down to Masjid Bunder where he runs a travel agency.

The police is questioning Kapadia to find out more about the mishap.

An officer from Bandra police station said, “Kapadia was driving his car at high speed when he suddenly saw the two labourers near a stationary tempo on the bridge. Unable to control the car, it rammed into the tempo and plunged down the bridge. He was accompanied by a woman and eyewitnesses said that the duo were helped out of their car by passers-by after which they fled.”

Daund sustained grievous injuries and his body was beyond recognition while Bansi was pushed off the bridge after which he was rushed to hospital in a critical condition.

Meanwhile, a third person, Mohammad ShakilSomani (26), who was standing on the road beneath, escaped with minor injuries as he had the presence of mind to move from his original spot after seeing the Chevrolet in free fall. Kapadia has been booked for causing death due to rash and negligent driving as per relevant sections of the Indian Penal Code and the Motor Vehicles Act.