BMC napping as buildings get altered under its watch?

Triggered by unauthorised alteration, the mishap had resulted in a death toll of 17. 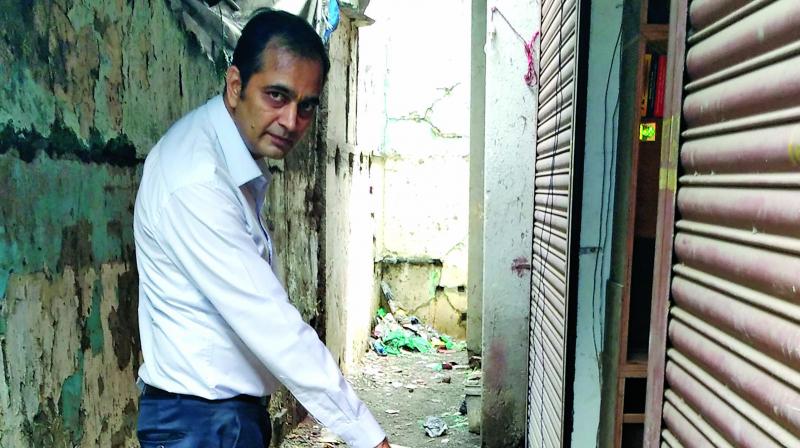 The Kurla shop that was allegedly altered illegally.

Mumbai: Citizens have slammed the Brihanmumbai Municipal Corporation (BMC), claiming that it is apathetic to their complaints, as it is yet to respond to the alerts against a shop owner in Kurla trying to allegedly tempering with the plinth of the shop. This comes the wake of the recent collapse of the Siddhi Saidarshan building in Ghatkopar. Triggered by unauthorised alteration, the mishap had resulted in a death toll of 17.

The civic body had been alerted about a ground-floor shop located at an under-construction SRA building in Nehru Nagar of Kurla for having allegedly broken the plinth and also inserted a loft on a four-inch wall, thereby weakening the wall. Sachin Shah, a shop owner in the same building had made the complaint in January this year, but the civic body is yet to take any action.

“The illegal alteration was made by the shop owner in the month of November last year. I had complained to the ward office in January and till today, the BMC authorities have taken no action. With such a tampered foundation, a Ghatkopar-like mishap is bound to happen after people start residing in the building,” said Shah.

The said case is of a partially built SRA building, Angoli Mala cooperative housing society. The ground floor of this structure has been reserved for the shop owners, who currently run their business on the roadside in Nehru Nagar.

Shah had also filed an RTI to check with the action taken by the BMC regarding his complaint, however the RTI reply revealed nothing but read; ‘This information is not available with this office’.

“The building doesn’t have an Occupation Certificate (OC), so we cannot take an action at the ward level. We will direct the complaint to central building and proposal department and send a notice immediately. The action has been delayed because of the OC issue,” said a civic official from ‘L’ ward (Kurla) when contacted by The Asian Age about Shah’s allegations.

What is a plinth?

A plinth refers to a base or platform upon which columns are erected; it negotiates between the ground and structure. Plinth protection is the additional length or strengthening provided to the base.