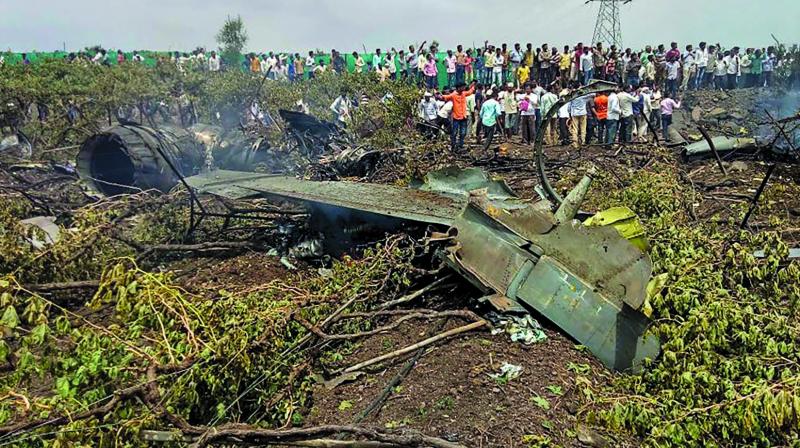 People gather around the mangled remains of a Su-30 MKI fighter jet after it crashed at Wavi-Tushi village, near Nashik. (Photo: PTI)

Nashik/Mumbai: A Sukhoi-30 MkI fighter jet, belonging to the Hindustan Aeronautics Limited (HAL), Nashik, crashed on Wednesday at around 11 am near Borthan, Shirwade-Wani village in Nashik district after taking off from the HAL airstrip. There were casualties even though both pilots ejected safely when the aircraft was mid-air.

According to the HAL, the aircraft was on a test sortie and one of the two pilots was a flight test engineer. HAL has ordered a “Board of Investigation” to find the exact cause of the crash. The plane was being piloted by Wing Commander Prashant Nair, accompanied by Squadron Leader L Biswal.

Sources said that the HAL Sukhoi had begun a regular sortie and a  technical fault allegedly developed within 10 to 12 minutes after take-off. The pilot informed the Air Traffic Controller and immediately ejected along with the co-pilot.Villagers claimed t the crashing plane hit a 220 KW electric line.

The Sukhoi-30 is a Russian-made, twin-engine fighter jet meant for all weather, air-to-air and air-to-surface operations and was inducted by the IAF in the 1990s.

The aircraft crashed in a vineyard, belonging to a farmer Sukhdeo Baburao Niphade,  Yogesh Nana Domse and pomegranate orchard owner Vilas Madhu Nikam. Charred, mangled parts of the aircraft could be seen at the site.

Niphade’s son Shyam and another labourer, working in the vineyard, sustained minor injuries from the falling debris and have  been admitted to Radhakrishna Hospital in Pimpalgaon Baswant.

Additional SP, Nashik, Vishal Gaikwad said, “The pilots ejected safely and landed in a field. The police arrived and cordoned off the area due to large crowds.”

Mr Niphade said, “The aircraft burst into flames and engulfed the entire farm of 1.5 acres. It slid through two other orchards, also destroying them. The burning debris fell into a well. Now, there is a smell of petrol in the well water and soil. Nothing can be grown.This was our only livelihood.”