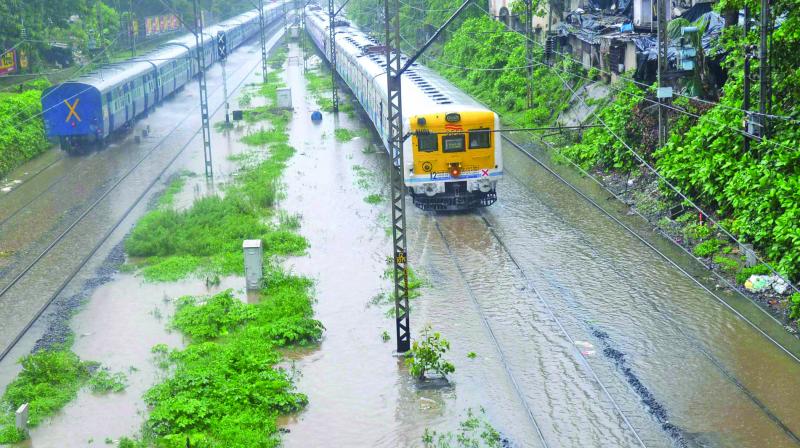 Around 150 trains were cancelled due to heavy downpour. (Photo: Rajesh Jadhav)

Mumbai: Incessant rainfall throughout Monday night and Tuesday morning led to delay in Central Railways (CR) operations as services had to be shut for an hour on the Andheri-CST line from 8 am to 9 am, while mainline was shut from 6 am to 7 pm due to water-logging. Around 50 trains were cancelled and 150 trains were delayed.

The CR had already barely recovered from the six-hour block on Sunday when the water-logging on the railway line, particularly at Kurla and Mahim, disrupted services throughout the day. An official explained saying, “Since trains on the CST-Andheri and mainline were shut for almost an hour in the morning, the availability of rakes/trains was limited. We had to wait until the water on the tracks receded and the signal panels were up and working again.”

The Kalyan-CST line was shut from 6 am to 7 am and some trains were diverted to the slow line, while the CST-Andheri section was completely shut, as there are no alternate tracks available on this line. The official added, “The trains began to follow schedule by 2.30 pm while the CST-Andheri line was still recovering until 5 pm.”

Making matters worse, even far off services in the northeast, that is the Kalyan-Kasara section was shut from 2.30 pm to 3 pm after the engine of the Kamyani Express failed near Atgaon thereby causing delays of almost ten long distance trains.

The Western Railway (WR) on the other hand saw almost no water-logging, due to which trains were by and large running on time.

Why do signal panels fail?

When water-logging occurs on the railway track, the signal relay is interrupted. These signals are important as they tell the motorman if the track on which the train is running has an oncoming train from the opposite direction. The lack of this facility results in the railways shutting down the line altogether as it risks the chances of a head on collision.