Some of these members even succeeded in meeting chief minister Devendra Fadnavis on Saturday. 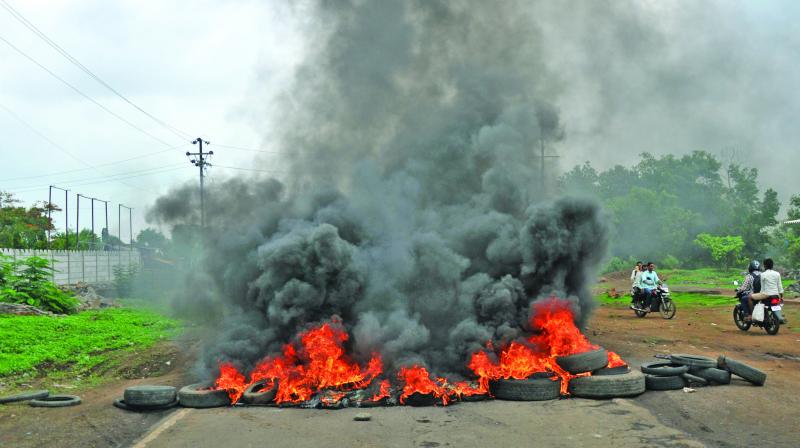 Around 28 persons including 12 policemen, sustained injuries even as six vehicles were torched in the riots.

Mumbai: The Thane police has arrested 32 persons in connection with rioting by farmers at Kalyan’s Nevale village last Thursday, in which around 28 persons including 12 policemen, sustained injuries even as six vehicles were torched. Nearly a dozen accused belonging to the “Nevale Sangharsh Committee” have been named in the FIR registered by the police but are still untraceable. Some of these members even succeeded in meeting chief minister Devendra Fadnavis on Saturday.

The police meanwhile claimed that the committee members who allegedly planned the protest at Nevale and other villages of Bhal, Khoni and Rawal Pada, lost control over the mob, after which lumpen elements hijacked the protest and indulged in violence, targeting even the police. The investigators earlier said that the mob acted on the instructions of committee members and the plan was to gather under the pretext of carrying out a blockade and pelt stones and torch vehicles. The Hill Line and Manpada police stations registered cases in connection with the incident and in all, 32 persons have been arrested till date.

Param Bir Singh, commissioner of police (Thane) said, “We have also identified 50 to 60 miscreants who were very active in the rioting. Some of these persons have been arrested while we are looking out for the others.”

Officials said that most of the villagers were still on the run after fleeing from their villages after rioting. Officials however added that the roles of committee members were being investigated based on statements of the arrested accused. The accused were identified with the help of photographs and video clips shot during rioting. Four police teams were formed for tracking down accused persons who fled from their villages following rioting.

These villages have been wearing a deserted look since Thursday as all shops are shut after the incident. The shops opened on Tuesday and the police said that life was coming back to normal.

On Thursday, a group of around 1,500 villagers from Nevale gathered to silently protest the Navy’s plan of taking over land to build a fencing wall, as per permission granted to them by the police. The mob however resorted to violence and at around 9.30am, began pelting stones and assaulting police personnel with sticks, and even torched their vehicles. Simultaneously, villagers from Bhal, Khoni, Rawal Pada, located within a radius of 3km spilled onto the streets and indulged in stone pelting and arson, targeting the police. They blocked traffic by assaulting truckers and taking over their vehicles. The situation was brought under control at around noon after the police resorted to gun firing and lathi charge.