The hospital has an anti-ragging cell, a women’s cell, and many reservation bodies. But Dr Tadvi never approach-ed anybody. 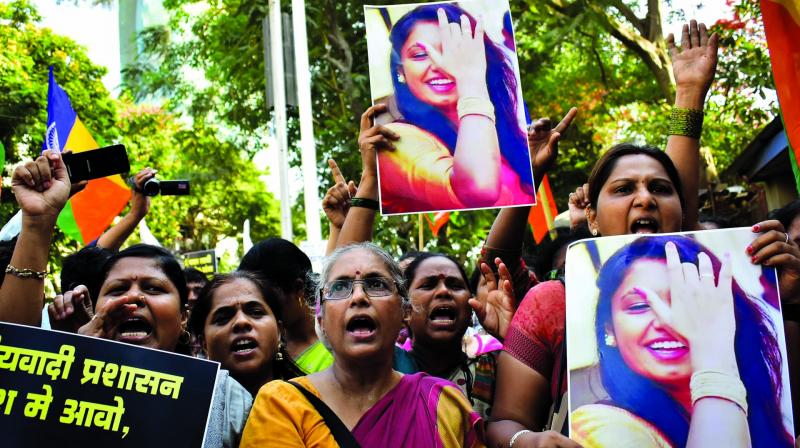 Mumbai: The Brihanmumbai Municipal Corporation’s (BMC’s) SC/ST Employees Association Monday said that if Dr Payal Tadvi had approached them regarding the abuse she went through, the union would have ensured that the three doctors harassing her got show cause notices and their parents got a call from the hospital administration.

Meanwhile, the dean of civic-run Nair Hospital where Dr Tadvi ended her life, claimed that he was never intimated verbally or in writing about any such troubles.

Dr Sanjay Kamble, secretary, SC/ST Employees Association, said, “We would have ensured that Dr Tadvi got free space to study, practice in the hospital she worked so hard to get admission into. The matter could have been solved with the administration but unfortunately, she never complained.”

Dr Ramesh Bharmal, dean, Nair Hospital, told The Asian Age, “Dr Tadvi’s parents had only mentioned the complaint in the hospital’s inward register but they revoked the complaint before it came to me. The hospital has an anti-ragging cell, a women’s cell, and many reservation bodies. But Dr Tadvi never approach-ed anybody. The MARD’s state head is from Nair hospital itself, still Dr Tadvi did not tell her anything. If I had the slightest idea, I would have taken strict action against the three doctors.”

The BMC SC/ST Employees Association has raised another case of alleged discrimination in civic hospitals and the civic administration.

The association has claimed that promotion of the dean of Nair hospital Dr Ramesh Bharmal has been held back only because he belongs to the Scheduled Caste. Dr Bharmal is due for promotion as director of medical education for all major BMC hospitals. The post has been lying vacant since October 2018 after Dr Avinash Supe retired.

The secretary of the association, Dr Sanjay Kamble, said, “The additional charge is given to a deputy municipal commissioner (DMC), who is from the administration department, and not a medical expert. This is not the only incident at the top level. A few years ago, Dr Damale, who was appointed as director, was forced into voluntary retirement; he, too, was from the backward class. The union will be meeting the National Commission for Scheduled Castes on May 29 in this regard.”

The additional charge of director of medical education is currently with DMC (health) Sunil Dhamane.  About this, Dr Bharmal said, “There is no caste issue at all. The system is very fair and I am proud to work in it.”