He threw pamphlets on the road, which said that Thackeray cousins' unity will help farmers, workers and Shiv Sainkis. 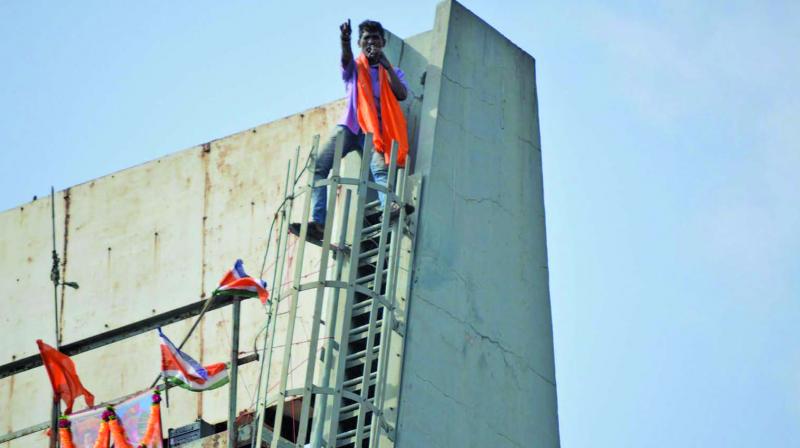 Mumbai: A Yavatmal Shiv Sena worker, Shyam Maruti Gaikwad (35), climbed atop a gantry near Khodadad Circle at Dadar on Sunday afternoon and stood there for over an hour demanding that Shiv Sena chief Uddhav Thackeray and his cousin Raj Thackeray, who heads Maharashtra Navnirman Sena (MNS) should come together politically. He threw pamphlets on the road, which said that Thackeray cousins' unity will help farmers, workers and Shiv Sainkis.

The youth threatened to undertake an indefinite hunger strike. He came down after being counselled by the police and fire brigade officers. Matunga Police detained him and his medical evaluation was done at Sion Hospital. Gaikwad's reason for carrying out the stint was that farmers are suffering due to political ambiguity. If these two parties come together it would be for the betterment of the cultivators and it would be a 'Ram Rajya', the pamphlet said.

The fire fighters arrived at the scene and started counselling him but he refused to budge. Few calls were made to political parties to satisfy him. Speaking to The Asian Age, Gaikwad said, “I want reunion of both brothers, because of their separation farmers are in lurch.”

Speaking with this newspaper, senior inspector B.M. Kakad of Matunga police station, said, “I was constantly counselling him and assured him that his problem will be solved, initially he was reluctant but late he came down.”

Mr Kakad added, “He might suffer from psychological disorders. We have informed his family and he will be handed over to them. We have not booked him under any sections.”