Lawyer who cleaned city beach thanks PM for encouraging words

He was given the ‘Champion of the Earth’ Award making him the first Indian to achieve this distinction. 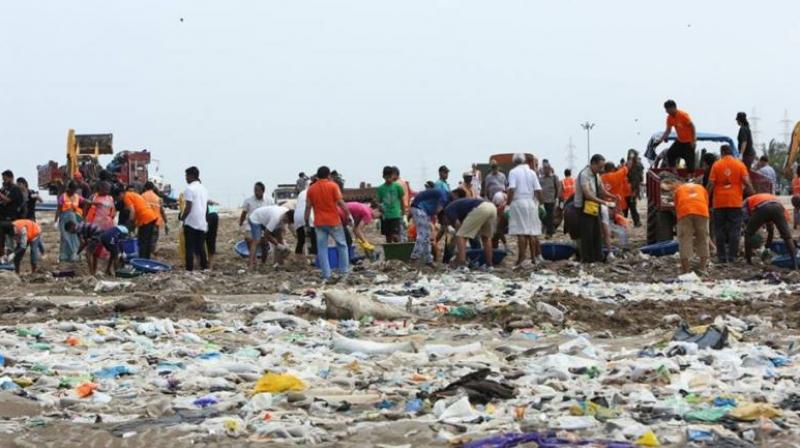 Mumbai: A city-based lawyer, who was lauded on Sunday by Narendra Modi for cleanliness work he has done at the Versova beach here, thanked the Prime Minister saying his words will act as a morale booster.

Afroz Shah, a 36-year-old lawyer at the Bombay High Court, was praised by Modi during the radio programme 'Mann Ki Baat' for the cleanliness work done by him and his team to transform the Versova beach.

"This campaign was owned by Versova Residence volunteer or VRV. A gentleman called Afroz Shah started this mission from October, 2015 whole heartedly with all his might, slowly people started joining his bandwagon and turned into a People’s movement.

"For this outstanding work, United Nations Environment Programme or UNEP awarded ‘Champion of the Earth’ Award to Afroz Shah, and thus he has become the first Indian to achieve this distinction. I congratulate Afroz Shah, and felicitate

this people's movement. The manner in which he gathered the people of the area into a peoples collective and gave it the shape of a people’s movement in itself an inspiring example," Modi had said.

An elated Shah told PTI that he was thankful to the prime minister for the kind words.

"This has further encouraged me to expand my mission and I would like to replicate (it) at all the beaches across the country, and not only in Mumbai," said Shah.

The lawyer said he has taken an oath to continue cleaning the beaches on a mission mode.

"I would continue till I am physically active or my limbs help me and I am confident to take a large number people along with me in my mission," he added.

According to Shah, since the drive has been launched, his team has so far removed around 5.5 million kg of waste in 85 weeks from the Versova beach.

"My team members go the beach every Saturday and Sunday and collect the garbage and dump it near the points from where, BMC (civic body) men take it to segregation centres," Shah explained.