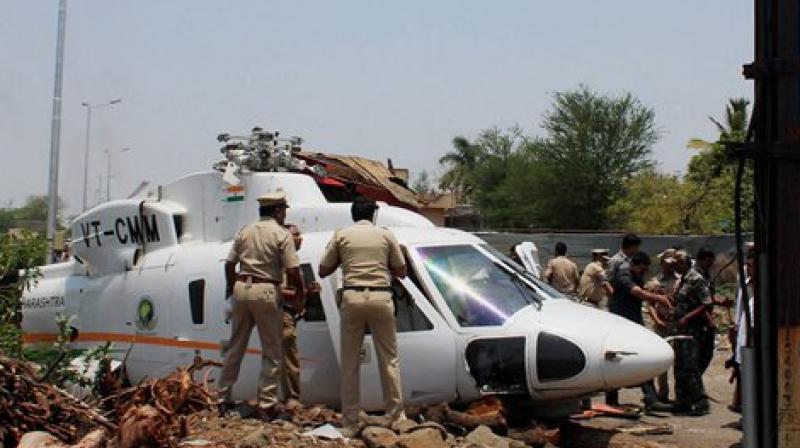 Police officials stand by the wreckage of the Sikorsky VT-CMM helicopter, carrying Maharashtra chief minister Devendra Fadnavis and his team, that crashed-landed following a technical snag shortly after take-off at Nilanga in Latur. (Photo: PTI)

Mumbai: Two days after chief minister Devendra Fadnavis’ helicopter crash-landed in Latur, it has emerged that the aircraft’s emergency locator transmitter (ELT) — a device that transmits emergency messages to nearby Air Traffic Control (ATC) towers and satellites — had failed to activate.

In the chief minister’s case, the helicopter was landed in a populous area and hence Mr Fadnavis received help immediately. Terming the episode a ‘serious technical lapse’, experts in the aviation sector have said the ELT manufacturers should be held accountable and India should approach the International Court of Justice over the matter.

Sources in the Maharashtra civil aviation department confirmed that the ELT did not activate during the CM’s helicopter mishap. They added that it’s mandatory to have an ELT in every helicopter, but it the device had been dysfunctional in many instances off late.

Aviation expert Mandar Bharde, the MD of MAB Aviation, said possible biases held by ELT manufacturing companies towards India could be at play. “Why did the ELT not activate in so many instances? Our civil aviation ministry should proactively question the manufacturers about this serious technical fault and make them answerable. The ministry should raise the issue in an international court and prevent the purchase of instruments from such irresponsible manufacturers. Will these manufacturers dare sell such equipment to other countries?” Bharde asked.

Another expert, Vipul Saxena, recalled that he was the first to point out the ELT issue, when the helicopter of Y.S.R. Reddy, the late CM of Andhra Pradesh, had crashed. “Once again the same discrepancy has come to light, which means that compliance with the Blue Book and mandatory VVIP/VIP checks are not being taken seriously. I appeal to the civil aviation ministry to eliminate the complacent approach in helicopter operations in India — especially those carrying VIPs — by taking the Directorate General of Civil Aviation and helicopter operators to task,” Mr Saxena said.

Former chief minister Prithviraj Chavan brought up the issue of maintenance. “It is a basic requirement that maintenance of the helicopter has to be there. One cannot compromise on this aspect. Everybody wakes up when some incident takes place. I have raised issue of building heliports that have all necessary infrastructure. In absence of proper maintenance and infrastructure we are compromising on the safety of politicians,” Mr Chavan said.

What is an ELT?
According to Saptarshi Chatterjee, director, engineering at MAB Aviation, the emergency locator transmitter (ELT) is basically a radio device fixed in most aircraft. “It emits messages on a very high frequency during the accident, which helps to identify the location of helicopters in remote areas. It is useful in search and rescue operations,” said Mr Chatterjee.