Eman to be shifted to Abu Dhabi’s Burjeel Hospital

Th war of words has caught external affairs minister Sushma Swaraj’s attention and she took the stock of situation on Thursday morning. 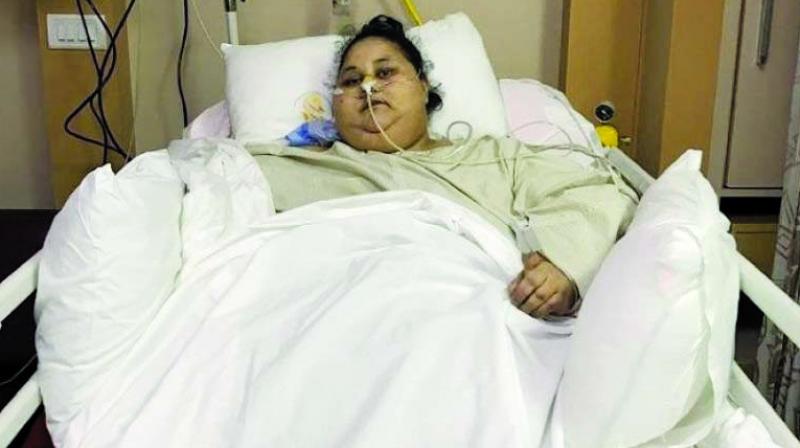 Mumbai: After shedding a mind-boggling 324 kg in three months, Egyptian national Eman Ahmed (36), who now weighs 176 kg is likely to be shifted to Abu Dhabi’s privately-run Burjeel Hospital for further treatment. The decision comes in the backdrop of an ugly spat between Ms Eman’s sister Shaimaa Selim and the team of doctors treating Ms Eman at Saifee Hospital Mumbai.

Th war of words has caught external affairs minister Sushma Swaraj’s attention and she took the stock of situation on Thursday morning.  A team of doctors from Burjeel Hospital had visited Ms Eman on Wednesday to assess her health and treatment.  Ms Selim suspects the treatment provided to Ms Eman is incorrect and therefore sought an independent medical assessment. Ms Selim insisted that her sister be examined by doctors from Burjeel Hospital after the doctors from Saifee Hospital said that they would discharge Ms Eman soon. Doctors from Saifee opine that Ms Eman could continue her weight reduction, physiotherapy and neurological treatment abroad. Saifee Hospital doctors said that they had done their best and ‘concluded’ Ms Eman’s treatment. “She will be shifted soon,” said a doctor.

Dr Aparna Bhasker, section chief of bariatric surgery, Saifee Hospital said, “She came on a chartered cargo plane and goes back as a passenger on a flight in business class. The team of doctors has done a fabulous job and her recovery has been unprecedented.”

Meanwhile, state health minister Dr Deepak Sawant on Thursday backed the decision taken by doctors from Saifee Hospital regarding Ms Eman’s treatment. “The hospital has taken good care of Ms Eman. She has lost significant weight. It is wrong to blame the doctors. The government helped the family for visa. However, the way Ms Selim criticised the doctors has maligned the image of the country,” Mr Sawant said.