The police said that all 94 police stations in the city have been asked to increase presence at the areas of high footfall. 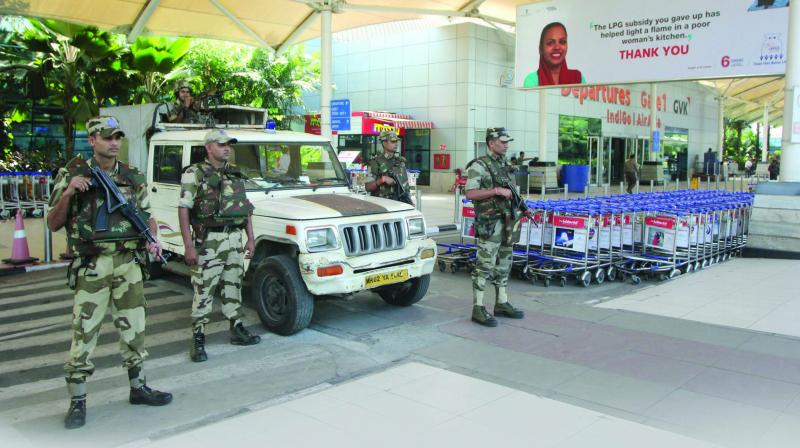 Apart from the local police, Quick Response Teams (QRT) and the reserve police platoons have also been deployed at locations across the city. (Photo: Mrugesh Bandiwadekar)

Mumbai: After the coastal security agencies on the western coast of India were put on high alert amidst tensions between India and Pakistan, the Mumbai police have also beefed up security in the city with maximum emphasis on the sea and beach fronts. The city police said that they are closely coordinating with the navy and the coast guards and have put their port wing on high alert.

A concentrated effort is being put up focusing the land, water, air and cyber security and the city police is coordinating with the concerned state and central agencies for the same.

The police said that all 94 police stations in the city have been asked to increase presence at the areas of high footfall. The officials said that surprise traffic checks and verification of antecedents of suspicious persons have been ordered.

“All required steps have been taken as a part of the heightened security measure in the city. All the vital installations and other sensitive locations have been covered with improved security citing current circumstances,” said Manjunath Singe, deputy commissioner (operations) and Mumbai police spokesperson.

Apart from the local police, Quick Response Teams (QRT) and the reserve police platoons have also been deployed at locations across the city. The Force I commandos have also been alerted to counter any untoward situation, police said.

The officials added that apart from land and sea, the aerial security is also being closely monitored by the agencies. The city airports have also been put on alert by the central government, police said.

The security threat might also spell the end of ongoing budget session of the State Legislature earlier than its scheduled end on March 2. According to the sources, the session might be curtailed on Thursday only.

Chief minister Devendra Fadnavis called an all-party meeting in the assembly on Wednesday evening after both the houses were adjourned. “Various aspects of the possibility of security threat to Mumbai were discussed at the meeting after which it was proposed curtailment of the session. A formal decision on curtailing the session may be taken on Thursday after both the houses approve the vote on account for first four months of the next fiscal year,” sources said.

Minister of state for ho-me Deepak Kesarkar said that there was no need to panic, though the security across the city and rest of the state has been tightened. ‘‘Mumbai is always on high alert,’’ he said.

The coastal wing of Mumbai police meanwhile have been asked to increase coastal patrolling and keep up the vigil. “The deputy commissioner of port zone of city police is supervising the situation on ground herself. There is close coordination between the command rooms of coastal police, navy and the coast guards,” added Mr Singe.

The police’s cyber wing is monitoring the online chatter and keeping tabs on any provocative and misleading content that could lead to any law and order situation. The police said that mass messaging applications are being closely monitored.

The Government Railway Police (GRP) and the Railway Protection Force (RPF) have also increased security at all the major stations in Mumbai. The railway police are monitoring the CCTV camera footage real-time of the important stations and terminals.

The security threat to Mumbai due to the escalated tensions between India and Pakistan might spell the end of ongoing budget session of State Legislature earlier than its scheduled end on March 2. According to sources, the session might be curtailed on Thursday only.

The budget session, which generally lasts for around five weeks, was scheduled this time for only a week due to vote on account. The session began on February 25 and was to end on March 2. However, now, it might end on Thursday, sources said.