Dr. Lakdawala said to The Asian Age, “It is a sheer case of morbid obesity due to which he has several disorders. 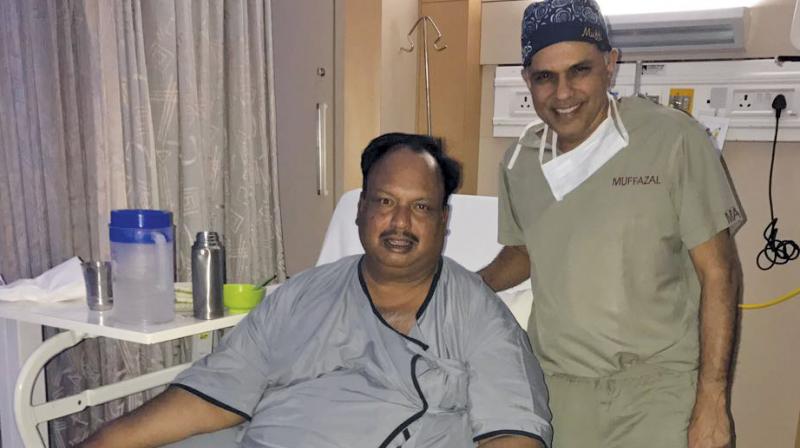 Mumbai: The Madhya Pradesh police will shoulder the costs of the weight-reduction treatment to be provided to its police inspector Daulatram Jogawat, who has recently been in the news over his weight problem.

Superintendent of Police, Manoj Kumar Singh confirmed this while speaking to The Asian Age. Mr Jogawat is to be treated at Mumbai’s privately-run Saifee Hospital.

Mr Singh said he would also consult with doctors of Saifee Hospital, on whether Mr Jogawat requires bariatric surgery to reduce his weight, which is around 180 kg.

Mr Jogawat, who suffers from a weight-related medical condition, will undergo weight-loss treatment and surgery and will be treated by obesity surgeon Dr Muffazal Lakdawala.

Speaking to this newspaper, Mr Singh said, “We are ready to fund from our police department’s police welfare fund and the MP police is in favour of the same.”

“We are supporting him morally and economically. Money is not a problem, it should not be the barrier in his treatment,” he said.

Dr. Lakdawala said to The Asian Age, “It is a sheer case of morbid obesity due to which he has several disorders. The surgery would be decided once I get all his reports.”

When asked if Mr Jogawat started gaining weight following a gall bladder operation in 1993, Dr Lakdawala said,“ It is not because of that. He just needs bariatric surgery. After surgery he will weigh 80 kgs, that will take time of a year and half.”

Mr Jogawat said, “I am fine and I am responding well to the treatment and tests which were conducted on me. I want to be fit and fine and get rid of the diseases which I am suffering from.”