Filmcity got 520 acre, so why oppose depot at Aarey: MMRC director 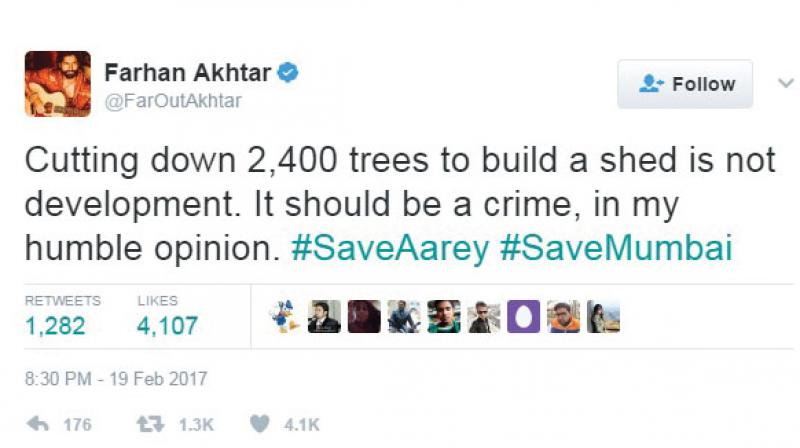 Mumbai: In a series of tweets, Mumbai Metro Rail Corporation (MMRC) executive director R. Ramana, has lashed out at Bollywood actor Farhan Akhtar and singer Vishal Dadlani who tweeted in support of the ‘Save Aarey’ and to not have Metro car depot inside Aarey Colony initiative. Mr Ramana tweeted: “State gave 520 acres from SGNP forest to Filmcity and none opposed there. Why oppose Metro-3? #Bollywood you got 200 Ha of Forest Green cover before @MumbaiMetro3 got 30 Ha in Aarey colony. Think before UTweet against #Publicproject.”

Mr Ramana did not stop at that, he told Mr Akhtar and Mr Dadlani: “You may have cars to ride but don’t deprive common man of Metro. Your casual Tweet can Sabotage @MumbaiMetro3 City waited 60yrs”.

Despite repeated attempts, Mr Dadlani was unavailable for comment. A text message sent to him remained unanswered. Mr Akhtar’s spokesperson said he was busy shooting.

Several political parties and environmentalists have been opposing Aarey Colony as site for the car depot, saying that it will lead to the destruction of greenery and wildlife. The decision of going ahead with Aarey colony was also challenged in the National Green Tribunal (NGT) by green activists where the case is ongoing.

Mr Ramana, later, tweeted. “Know the facts @MumbaiMetro3 cater 12 lac people per day in first year2020. Come Sit with us @MumbaiMetro3 for tea before youTweet about the project.”

In October 2015, an expert committee constituted by Mr Fadnavis gave alternatives that were rejected by MMRC, which said the same was not feasible. However, right before the 2017 BMC elections, Mr Fadnavis told green activists that he had directed MMRC to explore the option of Kalina for construction of car depot for Metro-3 underground corridor that connects Colaba-Bandra-Seepz and is city’s first underground corridor.

In September 2016, MMRC chief Ashwini Bhide had also lashed out at green activists saying that trees are axed every day for several real estate projects, so why oppose when it comes to a public transport project. Ms Bhide deactivated her Twitter account last week after a barrage of stinkers.