It started at around 10pm on January 26 in Nagpada. 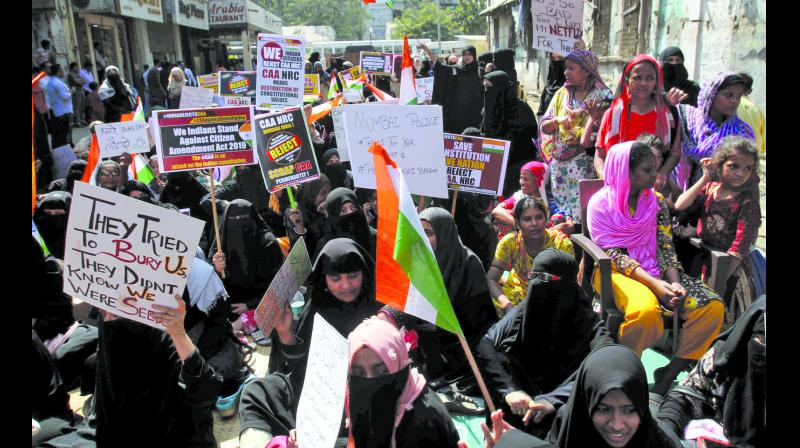 Mumbai: In a move that surprised local police and leaders, hundreds of women on the night of Republic Day occupied an under construction Morland Road in Nagpada, central Mumbai to protest against the Citizenship Amendment Act, the National Register of Citizens and the National Population Register .

The protest is said to be inspired from the New Delhi’s Shaheen Bagh. The women protesters threatened to continue the agitation till the Citizenship Act is repealed.

The protest started at around 10pm on January 26. The movement has surprised many because women along with their children have spent an entire night on the road holding placards and raising slogans against the new law. Indian social activist and former student of Jawaharlal Nehru University Umar Khalid also addressed the crowd on Monday evening.

Many were seen holding Indian flag and shouting slogans hailing Hindu-Muslim unity and brotherhood. Most of them are residents of Muslim-dominated Madanpura, Jhoola Maidan, Apripada, and Mumbai Central areas.

Slogans like “CAA is against the lingual & cultural autonomy guaranteed by the part 3 of the Constitution of India”, “They tried to divide us, Respect my existence or expect my resistance” on the placards were seen during the protest.

According to sources, the protest was planned in a private meeting and the time and location was deliberately not announced as the police could prohibit them from holding a protest.

A team of police officials reached the spot after around half-an-hour after the protest started and tried to convince the agitators to shift to some other ground instead of occupying the street. However, they refused to budge saying the road was already under construction and was partially closed for vehicular traffic. As a precaution, the police have put barricades and closed the road temporarily.

“We are monitoring the situation and further action will be taken as per the circumstances. The focus is on avoiding violence,” said a Mumbai police officer.

A similar protest was observed in Mumbra, Thane district on January 20. However it was called off after three days but started again for an indefinite time seeking abrogation of the Act.

Among those who participated in the march were senior counsel Ram Apte; and advocate Uday Warunjikar and Subh-ash Ghadge and Anjali Helekar – members of the Advocates Association of Western India.

“There is a presumption that every law is constitutionally valid and the CAA is not an exception. Unless any act is declared as invalid, the law continues, and hence we held a march in support of the CAA,” Mr Warunjikar told the media.

On January 20, a bunch of lawyers had gathered outside the high court and read out the preamble of the Constitution of India to protest the CAA. The group included the likes of Gayatri Singh, Mihir Desai and Agasti Vibhute.

Protests have been underway in different parts of the country against the new law, which grants Indian citizenship who entered India on or before December 31, 2014 due to religious persecution in these countries.