No arrests made so far in Diva train wreck attempt, locals quizzed. 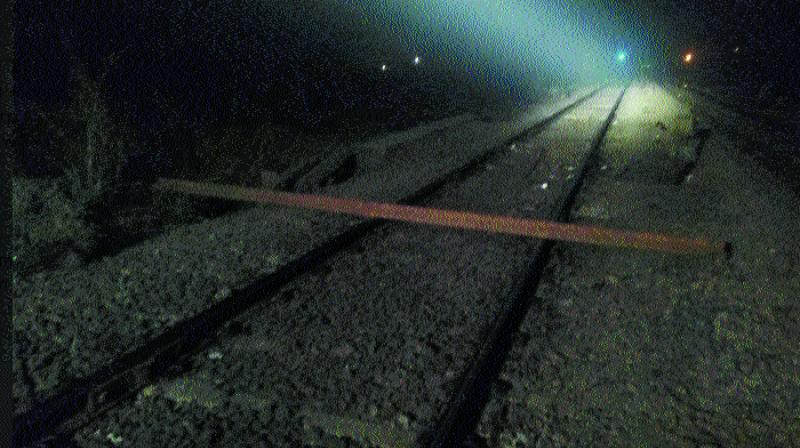 A 400-kg rail track was found lying across the railway tracks between Diva and Mumbra on January 24.

Mumbai: The Anti-Terror squad (ATS) will launch a probe into alleged rail sabotage on January 24 near Diva, according to railway police sources. The Central Railways (CR) had refused to rule out the terror angle in the incident in which a long piece of rail was found lying on the tracks between Diva and Mumbra railway stations.

The police sources said that sabotage angle would be probe as the piece of the rail weighed more than 400 kilogrammes and needed at least four people to place it on the tracks. A major tragedy was averted on Tuesday as the drivers of Jan Shatabdi express applied emergency brakes after noticing that a rail piece was lying horizontally on the tracks.

Sachin Bhalode, senior divisional security commissioner of Railway Police Force (RPF) said, “The incident was bizarre and the ATS will probe the sabotage angle.”  A railway official said “Since the incident took place just two days before Republic Day, the senior authorities are looking into the incident. They feel that it could also be just a mischievous act.”

After the case was filed against the Government Railway Police (GRP) there have been no arrests so far. The ATS has launched an investigation to look into sabotage angle. The sources said, “The ATS officials have visited the spot and have spoken to the locals and the railway staff. They will probe multiple angles including sabotage.” GRP commissioner Satish Kaushik refused to comment on the incident saying, “I am not at liberty to name any agency, but as of now all state agencies are looking into the case.”

A senior officer in the ATS has denied arresting anyone. “We have not made any arrests in the case so far,” a ATS senior officer said. Meanwhile, the National Investigation Agency (NIA) is currently probing another sabotage angle in Sealdah-Ajmer Express derailment, in which killed 140 passengers in November last year.