Thane to pay on the spot for wrong parking

According to Thane police’s Joint Commissioner of police Madhukar Pandey, the revision aims to make the exercise friction-free. 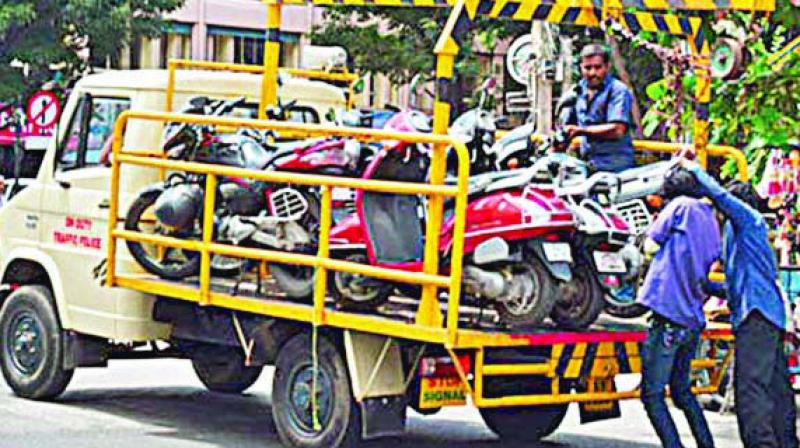 Representational image of two-wheelers being towed.

Mumbai: The towing policy of the Thane police has been revised, wherein it asks policemen to impose an on-the-spot fine on an errant driver if he or she turns up before or at the time of his/her vehicle being towed away.

According to Thane police’s Joint Commissioner of police Madhukar Pandey, the revision aims to make the exercise friction-free.

Mr Pandey issued the revised order and said, “The towing policy of Thane police has been revised to make the exercise as frictionless as possible. The new standard operating procedure is to be executed immediately.” He said, “The officers of traffic branch have been told that the primary objective of towing a wrongly parked vehicle is clearing the traffic for the other commuters rather than imposing a penalty.”

Thane police’s public relations officer S. Narkar said, “As per the new orders, the owner of a wrongly parked vehicle will be imposed an on the spot fine. Paperwork if any, has to be done at the spot only in minimum possible time. Traffic branch has been asked to introduce e-challan system to reduce this time even further.”

Recently, there were two cases wherein errant drivers quarrelled with policemen who were towing away their vehicles.

In one of the incidents, in Malad, a traffic cop was suspended after a car, with a woman and her baby inside, was towed away. This invited widespread condemnation. The incident happened in the month of November. However, later a purported video clip of it went viral on social media. After this incident, residents in several places agitated against traffic police’s behaviour. Such towing-related disputes have occurred in Kalyan and Kalwa area too.