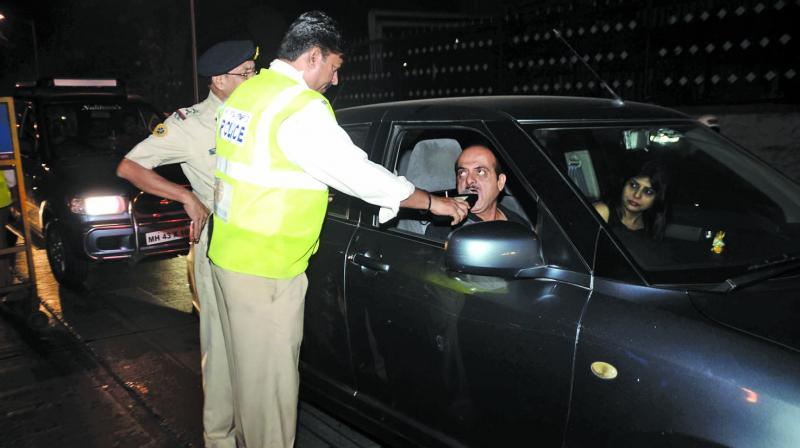 Mumbai: The Mumbai police is gearing up to ensure security for the New Year celebrations ahead by checking vehicle drivers for suspected drunken – driving and spreading awareness on consequences of driving-related violations beginning from Sunday evening, that is December 31.

Officials said that the 5,000-odd CCTV cameras installed in the city will help them detect and identify traffic-rules’ violators. On New Year’s Eve and the day after, around 16,000 policemen, including those from Mumbai Traffic police, will fan out on streets to ensure traffic rules are followed. Leave of policemen have been cancelled for Sunday and Monday.

Traffic cops will be deployed at various points such as Bandra, Andheri, Marine Lines, Linking Road, Crawford Market and Mahalaxmi temple. The department has also begun a campaign against drunk driving and it will peak on the night of December 31.

Speaking to The Asian Age, Amitesh Kumar, Joint Commissioner of Police (Traffic) said, “The traffic police will try its level best to eradicate drunk driving and only wish that people enjoy their celebration without any police interference. However this is a two way process, people too have to act responsibly.”

Mr Kumar added, “The CCTV cameras have proved to be a helping hand as it helps the police to nab the violators by tracking and chasing the ones who try to escape after flouting rules.”

The policemen will also be stationed outside major malls like Oberoi, Infiniti, Inorbit and Phoenix Mall to manage the crowd and control the traffic that might lead to a ruckus if left unmanaged.