It was at this spot that Ombale caught terrorist Ajmal Kasab alive while getting killed himself. 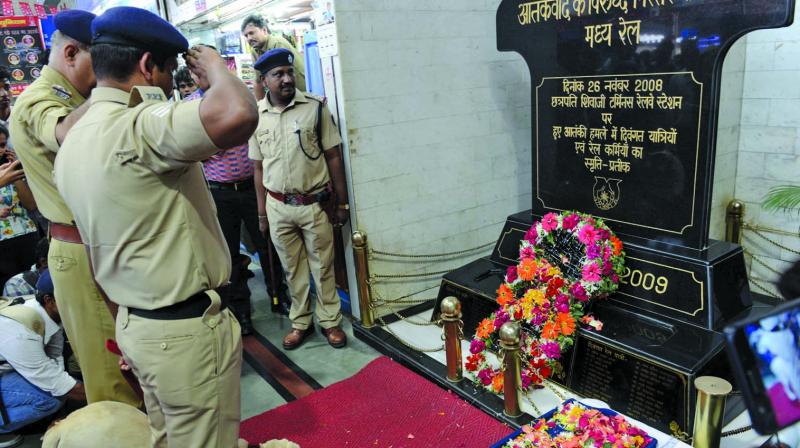 Mumbai: Mumbai police remembered their fallen comrades during the 26/11 attacks at the wreath laying ceremony at Police Gymkhana on Monday.  The mood was sombre as policemen paid tribute to the terror operation casualties and family members of victims fought back tears, 10 years after the worst-ever terror attack in India’s history.

Maharashtra governor Ch. Vidyasagar Rao and chief minister Devendra Fadnavis laid wreaths as a police band paid their musical tribute at the ‘Salutation Cere-mony’. Tribute was also paid at the memorial of assistant sub-inspector Tukaram Ombale at Gir-gaum Chowpatty, a sho-rt distance away. It was at this spot that Ombale caught terrorist Ajmal Kasab alive while getting killed himself.

On November 26, 2008 10 terrorists of Pakistan-based terror outfit Lashkar-e-Taiba attacked Mumbai. In the mayhem that followed for the next three days 166 people including 18 police officers and two NSG commandos were killed while 308 people were injured.

The then Anti-Terrorism Squad (ATS) chief Hemant Karkare, Major Sandeep Unnikr-ishnan, additional pol-ice commissioner Ash-ok Kamte and senior po-lice inspector Vijay Sala-skar were among those killed in the attack. Sal-askar’s daughter Divya said nothing could make up for the loss of her br-ave-heart father. “Ten years on, the pain is ve-ry much the same. When you lose a loved one like a father or a husband, there is nothing to compensate for that kind of loss,” she said.