The cabinet subcommittee met on Monday and discussed the legal aspects of the reservation bill. 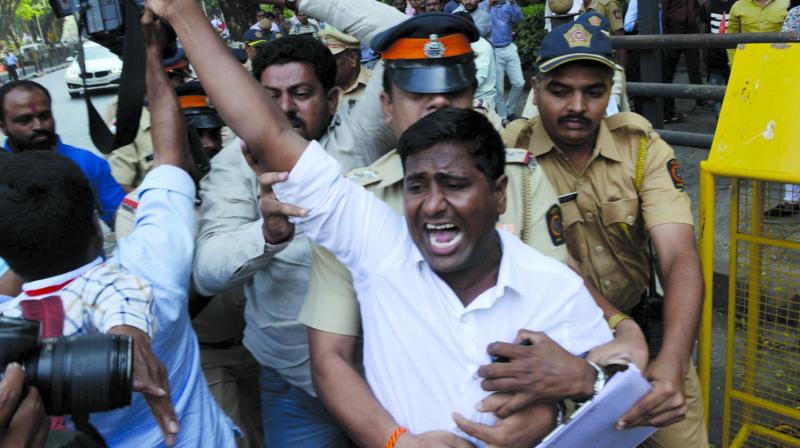 Sources also said that the state government wouldn’t table the report of Backward Class Commission to avoid any legal complications. If the bill is not passed by the Hou-ses by the end of the session, then the state government is also mulling option to bring an ordinance immediately.

The winter session of  the state Legislature will get over on Friday. The sources also said that the percentage of reservation to the Maratha community will be 16 per cent and it will be under Socially and Educationally Backward Class (SEBC) category.

The report of the backward class commission supporting backwardness of the Maratha community was submitted to the state on November 15. The state government has accepted recommendations of the commission, but not the entire report.

The state government will also not table any action taken report (ATR) based on the commission’s report. The Oppo-sition parties have been asking the state government to table the report, but sources said that the bill would be directly tabled in both the houses.

It is being said that the report and recommendation of the commission may be challenged in the high court.

So in order to avoid those legal hurdles, the state government pla-ns to introduce the bill directly.

“All the parties are supporting the Maratha reservation. But if at all the bill fails to get cleared by Friday, then we will come up with an ordinance immediately,” said a senior minister.

The mega recruitment for 72,000 state government posts has been put on hold for Maratha reservation. The reservation bill would have direct impact on this recruitment.

Meanwhile, the state government has taken steps to end the logjam in both the Houses of the state Legislature. The assembly speaker has called for a meeting of leaders of all the parties on Tuesday. Sources said that the government would try to justify its action of not tabling the backward class commission report in the House. The state Legislative Houses have not been functioning since a week, over demand of Maratha reservation. The Opposition has indicated that it won’t allow the Houses to function until the report is tabled.