Poster war between BJP, Shiv Sena ahead of BMC election 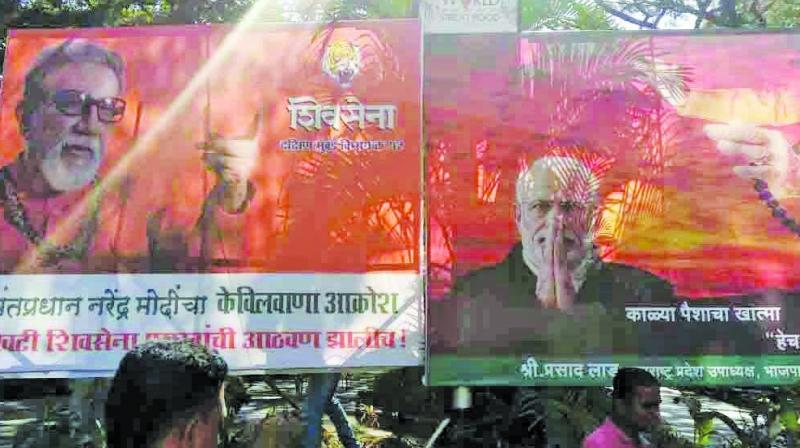 The posters that were put up at a traffic island in front of the Nationalist Congress Party office at Nariman Point. (Photo: AA)

Mumbai: A poster war has erupted between the Shiv Sena and the Bharatiya Janata Party (BJP) over demonetisation and black money ahead of the Brihanmumbai Municipal Corporation (BMC) election. The BJP in a poster had shown the late Sena Supremo Balasaheb Thackeray giving his blessings to Prime Minister Narendra Modi for being able to curb black money and ushering in ‘achche din’ while the Sena, as a retort, claimed that the PM needed to remember Bal Thackeray in a poster of its own.

According to a Shiv Sena insider, Prasad Lad, BJP’s Mumbai wing vice-president, put up the party’s poster at a traffic island in front of the Nationalist Congress Party (NCP) office at Nariman Point on Saturday morning. Shiv Sena’s South Mumbai vibhag pramukh Pandurang Sakpal put up the other poster to counter the BJP.

Shiv Sena chief Uddhav Thackeray has taken a harsh stance against the chaos that the common people have been encountering while attempting to withdraw cash from banks and ATMs. Mr Thackeray had threatened the BJP twice saying he could take an extreme step if Mr Modi ignored the common man’s difficulties in the wake of the government’s decision to withdraw higher denomination of `500 and `1,000 from the market.

A delegation of Sena MPs met Mr Modi last week and appealed to him to allow district cooperative banks to accept the defunct denominations and give extension for banks to accept old currencies. However, Mr Modi rejected all of their demands, invoking the legacy of the Sena founder.

He had told the Sena MPs that when he dies and meets Balasaheb in the afterlife, he would confidently say that he had done good work. Mr Modi then questioned the Sena delegation whether they would be able to say the same. Meanwhile, the police tore down both posters at Nariman point.

Mr Lad could not be reached for comments, as his cell phone was switched off. When The Asian Age contacted to BJP’s city president, Ashish Shelar, he said he was not aware of the poster.

Mr Sakpal, however, said the Shiv Sena’s poster was tit-for-tat action. “If they make mischief, we will not tolerate them,” the Sena leader said.