NCP: MNS not in grand alliance

This has come after NCP supremo Sharad Pawar and MNS chief Raj Thackeray were seen together during flight journey on Thursday. 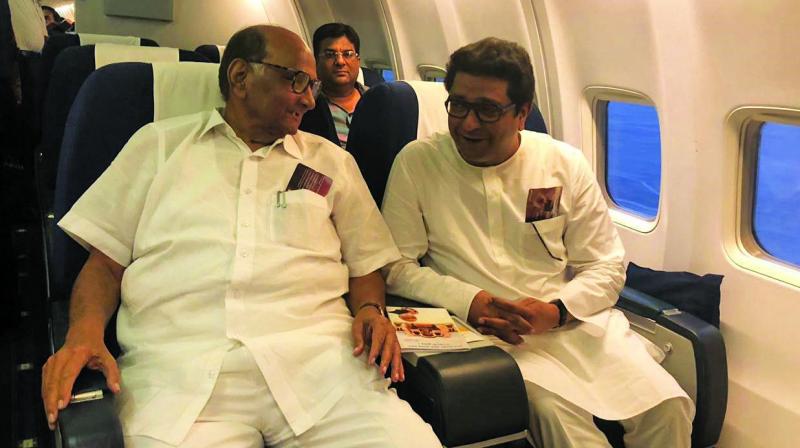 Mumbai: The Nationalist Congress Party (NCP) has clarified that the coming grand alliance against Bharatiya Janata Party (BJP) won’t have a place for the Maharashtra Navnirman Sena (MNS).

This has come after NCP supremo Sharad Pawar and MNS chief Raj Thackeray were seen together during flight journey on Thursday. There were talks of inclusion of the MNS in grand alliance for pockets in Mumbai, Thane, Pune and Nashik. But the Congress had opposed the idea vehemently.

Mr Pawar was with Mr Thackeray while returning from Aurangabad on Thursday. The photos and video of both leaders talking to each other went viral on social media. This kicked off the talks of NCP - MNS alliance for coming elections. Earlier, NCP’s Nawab Malik had said on record that the party’s workers want to have an alliance with Mr Thackeray. NCP had even raked this in meeting with Congress leaders. But Congress party rejected this proposal thoroughly.

Thursday was not the first instance when both leaders came together. In this year itself, Mr Pawar and Mr Thackeray met minimum three times. First Mr Thackeray had interviewed Mr Pawar in Pune. Later he met veteran politician in Mumbai at his home. All this was taken as Mr Pawar’s efforts to have political understanding with Mr Thackeray. “Though there is demand from section of workers. But our party’s ideology is on opposite pole that to MNS. It is not possible to have any kind of alliance with MNS,” said a senior NCP leader. Congress states chief Ashok Chavan also rejected an idea. “Leaders met on airport. We too meet BJP leaders if traveling by same plane. But that doesn’t mean it is political alliance,” said Mr Chavan.