The exact cause, however, is still being investigated, Mumbai Fire Brigade (MFB) officials said. 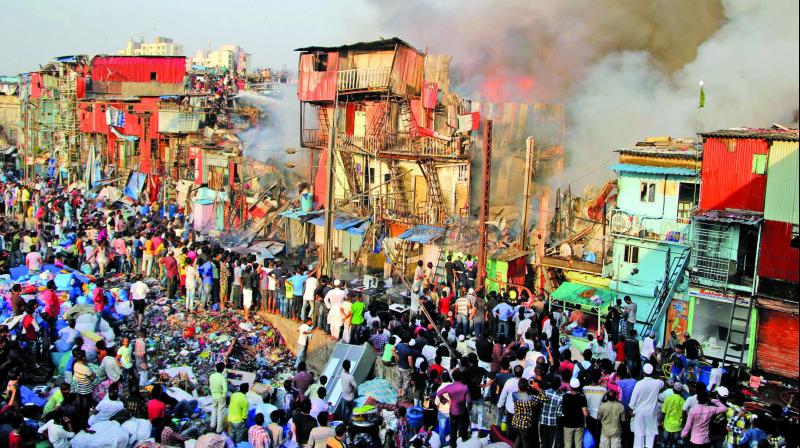 A major fire broke out in the Garibnagar slums at Bandra (east) on Thursday. Fire brigade officials suspect the blaze was due to a cooking cylinder blast. The slum is adjacent to the Bandra railway station. A total of 16 fire engines and 12 water tankers were rushed to the spot to douse the blaze. (Photo: Mrugesh Bandiwadekar)

Mumbai: Two persons, including a fireman, sustained minor injuries after a major fire broke out in the shanties at Garibnagar in Bandra (east) on Thursday afternoon, gutting the settlements completely.

According to fire brigade officials and locals, it is suspected that a cylinder blast was behind the blaze. The exact cause, however, is still being investigated, Mumbai Fire Brigade (MFB) officials said.

As the site is situated near Bandra railway station, a few services on the harbour line were cancelled. Previously, in March 2011 the slum, which receives political patronage from all parties, witnessed a similar fire. The conflagration broke out around 3.40 pm when the Brihanmumbai Municipal Corporation (BMC) was carrying out routine demolition-related activities.

The Government Railway Police (GRP) staff and few locals blocked its entry to commuters. The railway booking office on the eastern end was also affected due to the fire, but its staff was evacuated on time. However, eight shops below the booking office were gutted in the fire. "Dousing operations are on. We have covered the area entirely from all sides. The situation is under control," said P.S. Rahangdale, chief fire officer.

According to preliminary reports, a cylinder explosion caused the fire, but angry locals are pointing fingers at the civic body. "The BMC did not give us enough time to vacate the premises and arrived on the spot for demolition without any notice. While demolishing hutments, the bulldozer hit a gas cylinder, which led to the blast," alleged Shamsuddin Shaikh, a resident.

The two people injured individuals - Arivind Ghadge (43), a fireman, and Rizvan Sayyad (41) - were admitted to Bhabha Hospital, Bandra. Their condition is stable, according to hospital authorities.