Failed to act against encroachments despite fires in 2009 and 2011, locals allege corruption. 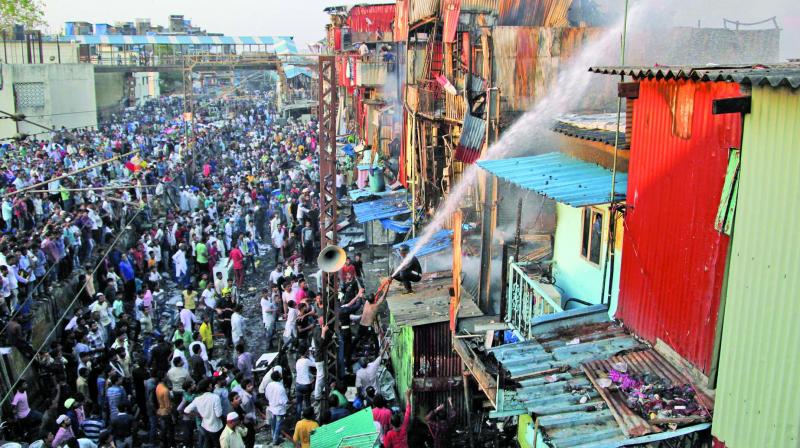 Firefighters attempt to douse the flames at Garibnagar slums as helpless locals, and policemen look on. (Photo: Mrugesh Bandiwadekar)

Mumbai: Despite the repeated outbreaks of fire, the Brihanmumbai Municipal Corporation (BMC) has failed to remove encroachments from the Garibnagar and Behrampada area. One of the reasons why gutted multi-storey slums tend to re-emerge after blazes is the law and order situation. Also, there has been an ownership dispute between the railways and the Brihanmumbai Municipal Corporation (BMC).

In 2009 and 2011, the shanties outside Bandra station witnessed similar fires, which claimed lives and property. The tragedy played out all too familiarly on Thursday afternoon, as the civic body consistently failed to clear the encroached slums, locals have alleged.

A civic official from the maintenance department of H/East (Bandra East) ward, however, denied allegations of inaction. “We conduct repeated demolition drives at Behrampada, but the demolition is restricted to encroachments on roads and that area that comes under the radius of the pipeline. There are many illegal vertical extensions inside, but we can’t take action there because few plots come either under the Mumbai Metropolitan Region Development Authority (MMRDA) or collector. Thus, the official concerned should take action there.”

As per data provided by the ward office, in a drive 97 illegal structures that had mushroomed on A.K. Marg, Behrampada had been demolished by the BMC as of July 3, 2017. However the civic body has not taken action with regard to illegal vertical extensions inside Behrampada that do not fall on the road.

Irfan Baig, a Behrampada resident, accused the civic body of indulging in corruption.

“The BMC does not take action because its system is corrupt. They take bribes and then they don’t take any action. Most families in Behrampada carry out illegal construction to get additional sources of income. Parents cannot rely on their sons, hence they construct extra storeys and rent them out,” said Mr Baig.