The teachers in front campaigned loudly against the government due to which the police carried out a lathi-charge leading to further chaos. 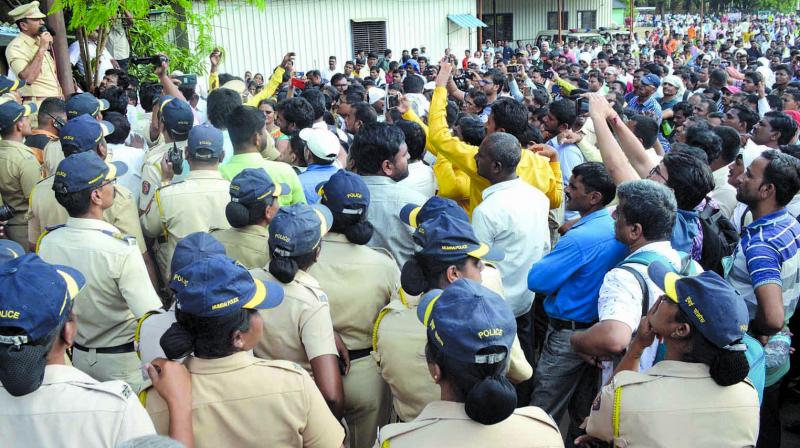 Mumbai: The police resorted to lathi charge on teachers demanding equal pay on par with teachers of aided schools at Azad Maidan Monday.

The lathi charge was resorted to without requisite permission from concerned authorities and the police. Two to five teachers were injured in the incident, which led to unrest in the area.

Raising slogans that read, “Same work same pay,” the protesting teac-hers Monday afternoon led a march at Azad Mai-dan, demanding that unpaid teachers be given the same wages as they do the same work as their counterparts in aided schools. Thousands of teachers were present at the occasion.

The teachers in front campaigned loudly against the government due to which the police carried out a lathi-charge leading to further chaos.

One of the protesters on condition of anonymity said, “We are teachers and we are fighting for our rights. It is a long pending issue and nobody is listening to us. There was no need for a protest if the government had accepted our demands.”

Asked about the lathi-charge, the protester said, “I don’t want to comment on it, as our colleagues have got injured. This is absolutely unfair.”

After receiving information about the tension created due to the teachers’ agitation, deputy commissioner of police, zone-I, Sangramsinh Nishandar, rushed to the spot and tried to pacify the protesters. When The Asian Age contacted DCP Nishandar, he remained unavailable for the comment.

The DCP immediately contacted education minister Ashish Shelar and apprised him about the situation. The police then told the protesters that Mr Shelar had invited a delegation of five members for talks.