The landslide occurred at 8.50 pm on Saturday at the Lonavala-Kalyan section. 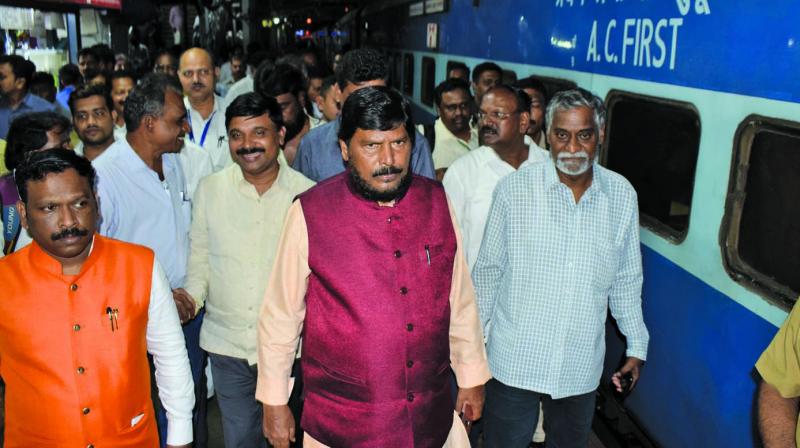 Mumbai: Two back-to-back landslides within 24 hours between Monkey Hill and Khandala, disrupted the long distance trains on the Mumbai-Pune route on Saturday night and Sunday. The landslide occurred at 8.50 pm on Saturday at the Lonavala-Kalyan section.

The express trains were delayed. The passengers, including Union minister of state for social justice and empowerment Ramdas Athawale were forced to wait at stations.

Mr. Athawale was going to Solapur from Thane by Siddheshwar SF Express (12115). The train which was supposed to reach Thane at 11.20 pm had arrived after 1.00 pm.

Sunil Udasi,  CR’s chief public relations officer  said, “Static watchman and CCTV cameras helped the administration to regulate the express trains on this section. Few trains both on up and down lines were detained. Hill gang was immediately despatched for clearing huge number of boulders.”

He also said that the UP line was restored at 12.20 am on Sunday. There were no cancellations of trains. However, around 12 pm on Sunday, traffic held up on up line due to another rockslide.

The message of up line track cleared and track safe was given at 2.05 pm.

The 11042 Chennai-CSMT Express, 11026 Pune-Bhusaval Express, 17321 Hubballi-LTT Express and 51318 Pune-Karjat Passenger (Malavli) were detained owing to the landslides on Sunday. A senior CR officer said that all three lines were cleared from 7.30 pm.