One dead, many still trapped in Saki Naka bldg collapse

Three slabs from the building collapsed at a time when 18 labourers were resting inside on the first floor. 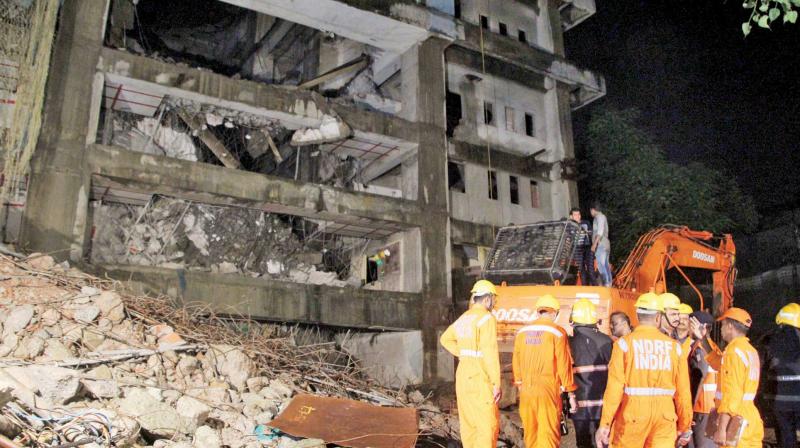 Three slabs from the building collapsed at a time when 18 labourers were resting inside on the first floor. (Photo: Mrugesh Bandiwadekar)

Mumbai: A six-storey structure at Saki Naka’s Sangharsh Nagar, collapsed during demolition on Saturday evening, leaving several people injured and some trapped under the debris. Three slabs from the building collapsed at a time when 18 labourers were resting inside on the first floor. Some of the labourers managed to jump off the building whereas the others are feared to be buried under the rubble along with two JCBs and one poclain. The Mumbai Fire Brigade has so far managed to rescue three labourers.

The rescued labourers were rushed to the civic-run Rajawadi Hospital, where a 32-year-old was declared dead on arrival.  According to the latest information received, a total of six labourers are still trapped under the debris. The rescue operation is still on.

The Krishnanpark building, located in Chandivili, was being demolished by owners Mukesh Builders, as they wanted to convert the commercial building into a residential complex. According to locals, the building had been left unoccupied for the last 12 years. “The demolition began from the top, which led to the slabs breaking and falling off,” said Santosh Kumar, a resident.

According to police officials, the dead person has been identified as Gurav Mallar, a resident of UP. However, the cops are unable to contact his family, as no one knows his address or phone number. The two others injured have been identified as Bablu Ajij (25), who suffered from minor injuries on his hands and Tirang Pasvan (19), who fractured his leg.

Chief fire officer P. Rahangdale said the middle portion of the structure collapsed while the other parts of it were intact, which was posing problems in rescue operations. “However, we are trying our best to ensure everyone trapped inside is brought out safe,” he said.