A JCB machine and a Poclain equipment, which were being used for demolition, were also under the rubble. 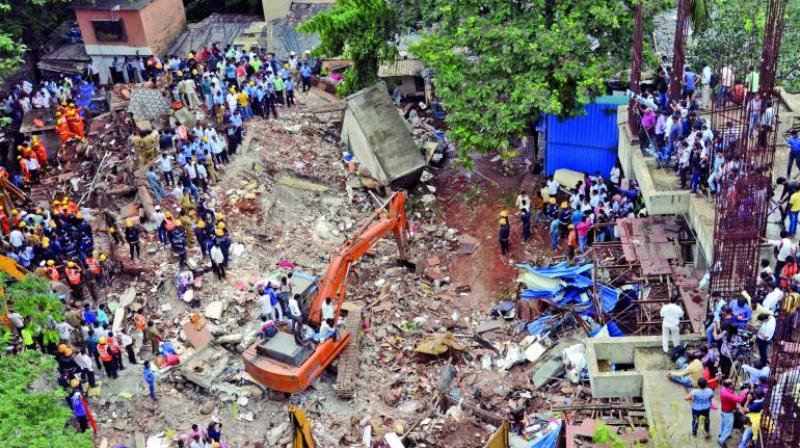 The building in suburban Sakinaka collapsed at around 5:35 pm. (Photo: File)

Mumbai: One person died and two others were injured when a six-storeyed building collapsed while it was being demolished here today, a senior civic official said.

Some people were still feared trapped under the debris.

The building in suburban Sakinaka collapsed at around 5:35 pm, said the official attached with the Disaster Management Cell of the Brihanmumbai Municipal Corporation (BMC).

The deceased was identified as Gaurav (32). The injured, identified as Bablu (25) and Pasvan (19), were admitted to Rajawadi Hospital, he said, adding both have suffered multiple fractures.

All the victims were part of the demolition team. Mahesh Narvekar, the chief of the Disaster Management Cell, said besides personnel from local agencies, a team of the National Disaster Response Force (NDRF) had also been engaged in the rescue operation.

PS Rahangdale, the chief of Mumbai Fire Brigade, said, "A portion of the building, standing precariously, is posing a risk to the rescue operation. Due to this, firemen were finding it difficult to carry out rescue work inside the building."

A JCB machine and a Poclain equipment (used for gathering and lifting soil or debris), which were being used for demolition, were also under the rubble, he said.

The six-storeyed structure was in a dilapidated state and it was being pulled down when the mishap took place.