Sunil Shitap, the accused, has Shiv Sena links; Cops say more arrests likely in case in which 17 persons were killed. 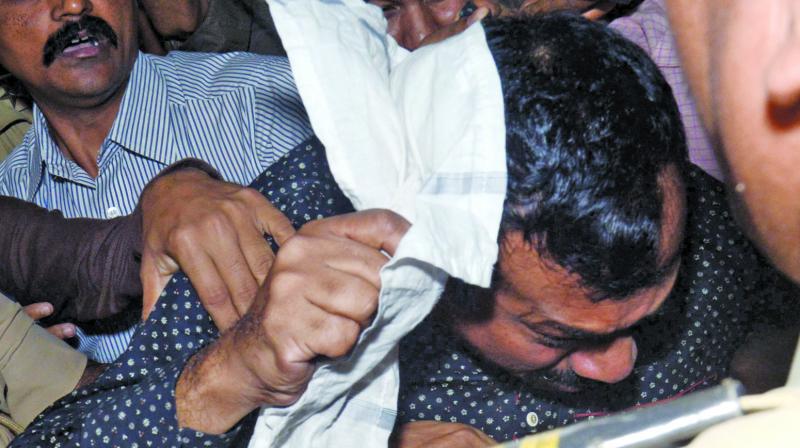 Mumbai: Sunil Shitap, the main accused in the collapse of Ghatkopar building ‘Siddhi Saidarshan’ on Tuesday in which 17 persons have died so far, was produced in court on Wednesday after his arrest. Shitap, whose wife had last year contested the civic polls on a Shiv Sena ticket, has been remanded to police custody till August 2. The police said more arrests in the case are likely. The building allegedly collapsed when two load-bearing pillars inside the ground floor nursing home owned by Shitap were broken the night before the incident as part of a renovation effort.

The police is interrogating those who were involved in the construction work, including the architect tasked by Shitap to renovate the nursing home and the officials concerned. Producing Shitap in court on Wednesday, the police asked for further custody to collect evidences against him.

At least 17 persons were killed, including a 3-month-old baby, and 14 injured when Siddhi Saidarshan collapsed around 10.30 am Tuesday.

The last person rescued from the collapse was Rajesh Doshi (57), at 2 am on Wednesday.

Defence lawyer Sharif Shaikh said, “The police should not add the section 304 (II) (culpable homicide not amounting to murder), Shitap was just trying to renovate the ground floor and make a nursing home for the betterment of people. The building was in dilapidated condition, therefore Shitap had asked his architect to renovate it, to plaster the wall and not break it. Shitap did not run away after the incident but co-operated with the police from the start.”

On the other hand, public prosecutor Vaishali Agavane said, “If Shitap knew the building was in bad condition why did he start the renovation work in the first place. He should have alerted the construction team not to break anything during the construction. His act is punishable and the police needs time to take residents’ statements, therefore his custody is important for police.”