Yet another cave-in sparks panic 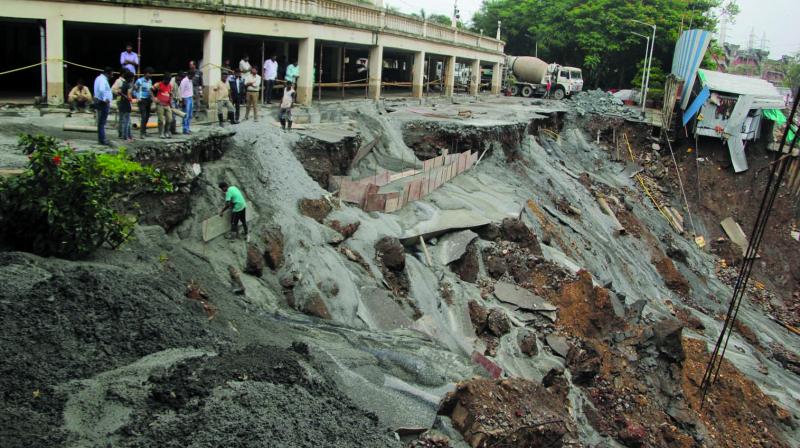 Mumbai: Barely had the dust settled on the caving in of the compound wall of the 32-storey Lloyd’s Estate building in Wadala, that residents living in nearby buildings on Tuesday afternoon complained of yet another cave in which created panic among them. The residents alleged that the developer at the site had continued his work despite being issued a “stop work” notice and that the BMC had turned a blind eye to it.

Early on Monday, the compound wall of the Lloyd’s Estate building collapsed, resulting in a nearby road caving in and damaging about 15 vehicles. Residents of three buildings — Blossom, Carnation and Lloyd’s Estate – have been living in fear since the mishap, and their panic heightened as they claimed that there was another landslide at 3.45 pm on Tuesday.

According to the residents, the landslide occurred near the garden of the D wing of Lloyd’s Estate. Simran Parmar, a resident, told The Asian Age, “This is ridiculous. Even after such a big incident, the BMC has not taken any steps to stop Dosti Builders from continuing with construction work.”

Rajesh Kashid, a resident of Blossom, said, “Due to the fresh landslide, we now fear that a mishap could occur anytime. But BMC officials have still not asked the developer to halt work.”

The residents have now decided to lead a morcha to the building proposal department of the F-North ward on Wednesday, demanding action against the developer and BMC officials.

Meanwhile, a  spokesperson of Dosti Realty said, “We are carrying out remedial measures as suggested by the court commissioner Shantilal Jain and accordingly, the work of backfilling and concretisation of the caved in portion is underway, under the supervision of our consultants and engineers. The reports of another landslide at the same site are not true. Due to the natural slope and gravity, certain amount of backfilling is resettling, which is normal and part of the process.”