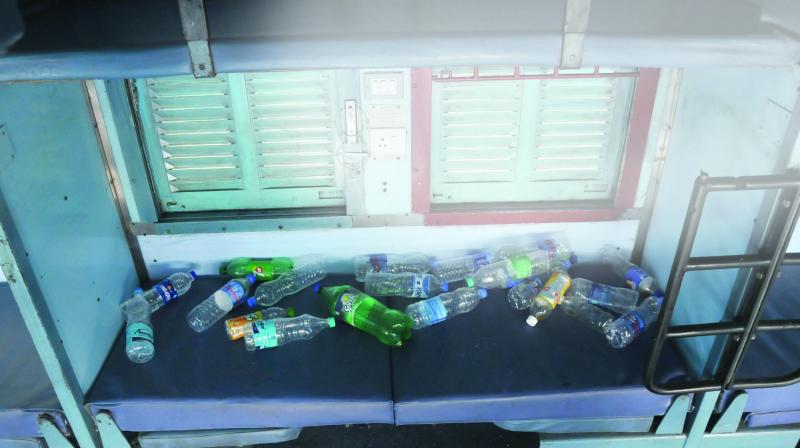 Mumbai: A casual glance inside the Mahanagari Express, which recently pulled into platform no 9 at Chhatrapati Shivaji Terminus (CST) around 2 pm, put on display the utter absence of civic sense on the part of 18.1 billion Mumbaikars, who have travelled aboard such long-distance trains at some point of time.

Heaps of trash, plastic wrappers and leftovers were strewn across the floor of the train. The most stomach-turning exhibit: the unabashed passengers’ complete lack of toilet etiquette.

It is not for nothing that the common man is widely believed to be public enemy No. 1 when it comes to property damage on one of the largest national carriers in the world. After all, it was the aam aadmi who defaced the much-vaunted luxury train Tejas Express — which currently holds the record as the only train with the capacity to run at 200 kmph — before it was even put into service.

Around 11 of its windowpanes were shattered by stone-pelters when the train reached Mumbai on May 20, from Delhi. 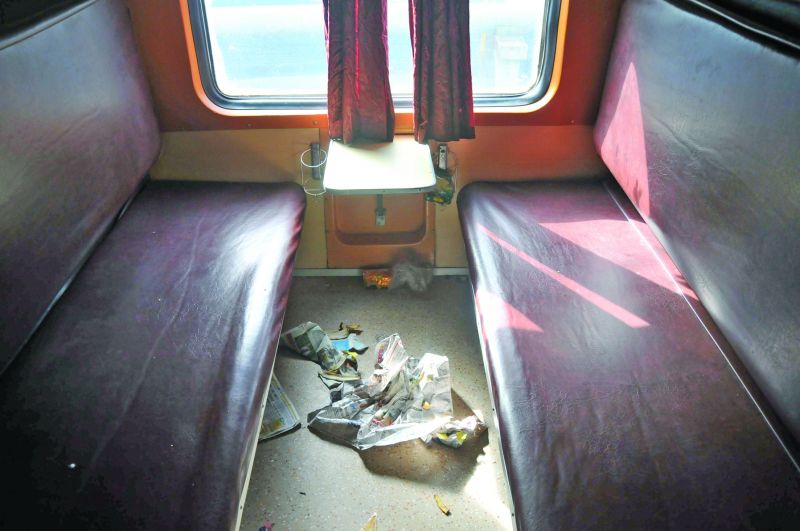 Wrappers of eatables are often left beneath the seat, out of sight. (Photo: Debashish Dey)

Furthermore, when the train returned from Karmali in Goa to CST on May 23, a day after it was flagged off from CST, it was discovered that its headphones were stolen and toilets sullied while attempts were made to unhinge its LCD TVs.

Central Railway (CR) and Western Railway (WR) officials said the matter may have come to the fore because of the Tejas incidents, but Railways has been seeing deviant passenger behaviour for a long time.

When The Asian Age went aboard the Maha-nagari, it learned that Railways collects around 25 bags of garbage from each of the 70 long-distance trains that dock at junctions in the city such as CST and Lokmanya Terminus on the CR and at Mumbai Cen-tral and Bandra on the WR.

Railway officials reve-aled that these express trains ferry 31 tonnes of garbage into the city everyday. This filth, officials said, comprises mainly the litter generated by passengers who travel in these trains for the duration of 15 hours (at the minimum).

A CR official said that when trains are taken to Wadi Bunder for a maintenance check, an indescribable amount of filth is found onboard.  The CR alone sees around 400 kg of garbage in each of its trains that undertake overnight journeys. The official added, “We see more garbage on our trains as compared to our counterpart, WR.”

WR officials, however, said that while trains that halt after long journeys at Dadar and Mumbai Central see around 3.8 tonnes of garbage every day, premium trains like the Rajdhani carry 550 kg of trash per trip.

WR chief public relations officer Ravindra Bhakar said, “We would like to appeal to the people to refrain from littering and to treat the trains as their own property.”

Batting for stringent rules to penalise people who litter, railway activist Nirmal Tekam-garh, an ex-member of the Divisional Railway Users Consultative Com-mittee, said, “You can’t imagine a commuter doing this at Metro stations. In fact, people who litter are met with a reprimanding look from fellow commuters. Unfortu-nately, this way of thinking doesn’t exist on the Railways and our long-distance trains.”