No stay on tree felling for Metro 3

Petitioner claims trees, which need to be relocated are being cut too. 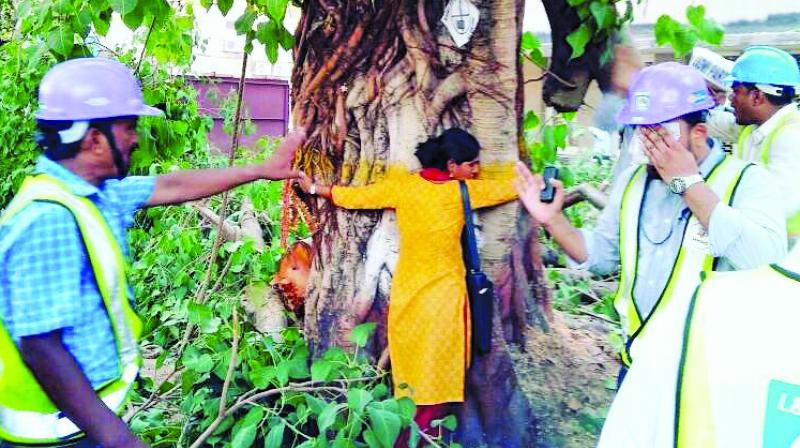 Mumbai: The Bombay High Court on Friday refused to grant a stay on a petition filed by a Worli resident regarding cutting trees for Metro III Project. The plea claimed that trees, which were supposed to be transplanted are also being cut. But the court refused to allow the petition after the BMC and the Mumbai Metro Rail Corporation Ltd (MMRCL) told the court that trees were being cut as per plan and sanction.

The vacation bench, comprising of Justice Prakash Naik and Justice Makrand Karnik, heard the intervention application filed by Kunal Birwadkar, seeking a stay on cutting of trees across the city for the Metro III Project.

In his petition, Birwadkar contended that wrong trees were being cut, and if it not stopped, it would grossly violate the HC order and prove to be an irreparable loss to the environment. He also requested the court to immediately constitute a committee consisting of two judges, as mentioned in the HC order, so that the petitioners could table their grievances before it.

Advocate Mustafa Doctor, appearing on behalf of MMRCL, refuted the allegations and told the bench that the process of cutting the trees was being carried out by following due process of law, and only after receiving permission from the Tree Authority. Anil Sakhre, counsel for BMC, reiterated the MMRCL stand. He claimed that earlier this week, BMC officers, along with officers of the high court and the Maharashtra Legal Services Authority had inspected all sites in south Mumbai where trees were being cut to ensure compliance with the norms.

Advocate Doctor argued that if the petitioner had any grievance regarding this, he  could approach the Member Secretary of the Maharashtra Legal Services Authority and the Deputy Registrar. It may be recalled that on May 5, the HC had appointed these officers to oversee the compliance in regard to the re-plantation and transplantation of trees.

During the hearing, the BMC lawyer had stated that the Junior Tree Officer of the concerned ward would oversee the compliance with regard to re-plantation and transplantation of trees. The MMRCL agreed to it and hence the court refused to stay cutting of trees and deferred the matter for further hearing on June 5.