The bird was later released by activists who deemed it fit to fly back to its natural habitat. 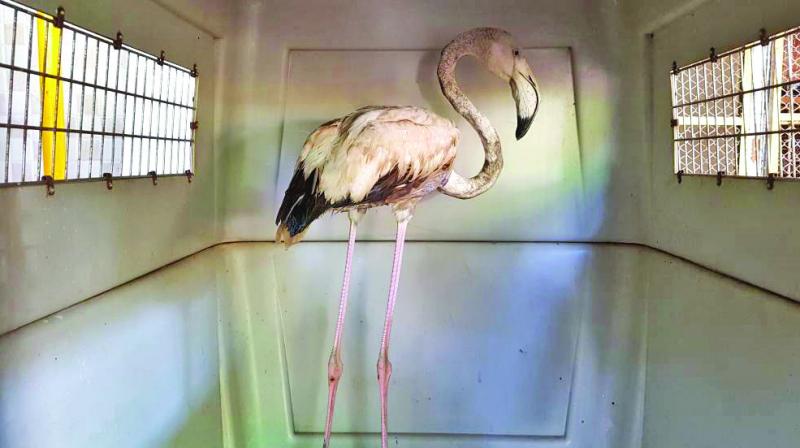 The bird had no major external injuries.

Mumbai: A flamingo that was seemingly unwell was rescued from Vitava, Kalwa and admitted to the Thane Society for Prevention of Cruelty to Animals (SPCA) on Friday.

The bird had no major external injuries and was placed under observation for a detailed examination. It was found to have been a victim of sunstroke. The flamingo could have strayed from its natural habitats in the city, an area that includes the Sewri mudflats. The bird was later released by activists who deemed it fit to fly back to its natural habitat.

According to experts, flamingos aren’t usually found near the Kalwa creek. The bird was spotted by a local and was then successfully rescued by the Kalwa fire brigade and Thane Municipal Corporation (TMC) around 2 pm. It was then rushed to Thane SPCA for immediate treatment.

Thane SPCA president Shakuntala Majumdar, who treated the flamingo, said, “The bird is fully grown and had a minor injury on one of its wings, which has been treated. The reason for it not flying could be either the sunstroke or the small wound on its wing.” She added that the bird appeared eager to fly back to its habitat. “Hence we decided to release it into its natural habitat around 6 pm,” she said.

Resqink Association of Wildlife Welfare (RAWW) founder Pawan Sharma, who helped release the bird, said, “The flamingo’s body language showed that it wanted to fly back. Hence the experts took the call to release the bird, as it was able to manage on its own.

Recently, four flamingos that had been found injured succumbed to injuries in January. While two of them were found to have been shot by an airgun, the others were found severely injured and couldn’t be saved by experts.