According to MPT, cable car would have a 3S system and ply on three ropes rather than the conventional system of a single rope. 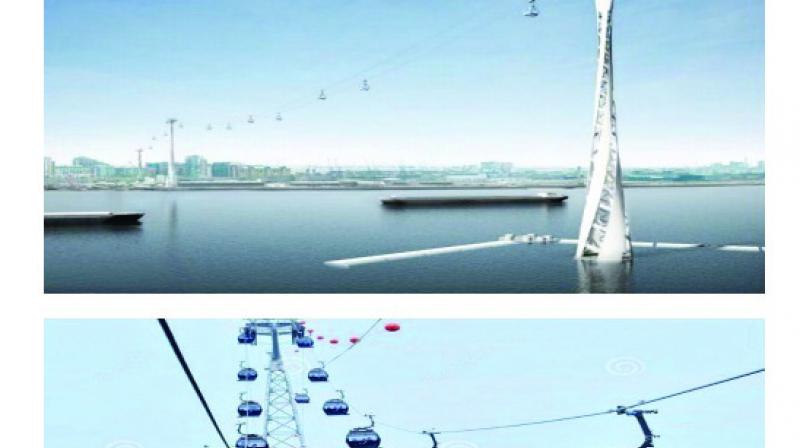 A projection of the proposed ropeway project.

Mumbai: The Mumbai Port Trust (MPT) has announced the construction of India’s longest ropeway between Sewri and Elephanta Island in the Arabian Sea measuring around 8 km in order to boost tourism. The ropeway will give bird’s eye view of flamingos and the proposed Mumbai Trans Harbour Link (MTHL), which is being executed by the Mumbai Metropolitan Region Development Authority (MMRDA).

The proposed ropeway will either start from Haji Bunder in Sewri area in Mumbai covering a distance of 8-km and will go up to Elephanta Island, (a UNESCO world heritage site). According to MPT officials, it will give an enormous view of mud flat, mangroves and flamingos in the season. The proposal of Trans Harbour Link is north of both the locations. The people riding on the cable car can enjoy the scenic beauty outside.

According to MPT, cable car would have a 3S system and ply on three ropes rather than the conventional system of a single rope. It has been incorporated in terms of safety, and it was ascertained that taking into consideration the distance. The single rope system is not long lasting and efficient. Hence, 3S System will be adopted for this project.

The MPT also has plans to have terminals at both ends and has also prepared a feasibility report for the project according to which it would cost around `500 crore.

MPT chairman Sanjay Bhatia said, “The project will be executed in public, private partnership model. The company constructing the ropeway would put in money. The concession period will be around 30 years. We also have floated an expression of interests for the project and a bunch of international and domestic players have shown interest.”