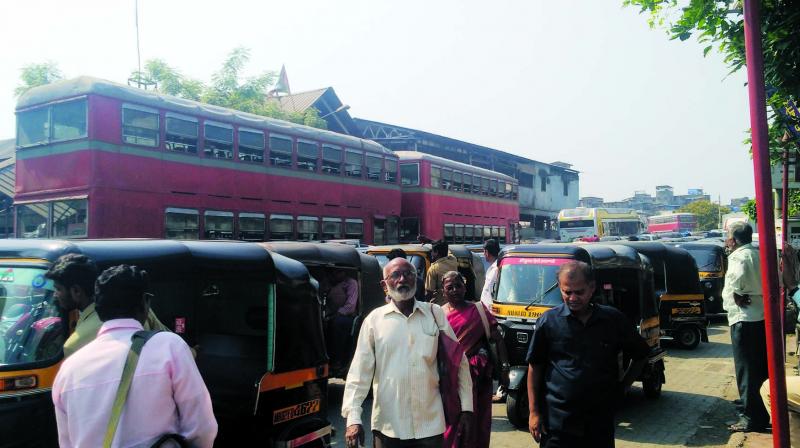 Despite there being a dedicated auto lane, the autos were parked in front of the bus stop to offer rides to those waiting at the stop. (Photo: Asian Age)

Mumbai: Mumbaikars are enjoying the cool rides offered by Bandra-Kurla Complex (BKC)-bound air-conditioned (AC) hybrid buses however, the wait for them stretches owing to the ruckus created by auto-rickshaws outside the Bandra east suburban railway station.

Commuters have alleged that the autos create a traffic jam on purpose, making it difficult for these buses to move, thereby forcing commuters to hail autos instead of the hybrid buses.

When The Asian Age visited the spot, auto drivers were found to have clogged the station road which leads towards the BKC. Despite there being a dedicated auto lane, it was seen that these vehicles were parked in front of the bus stop to offer rides to those waiting at the stop.

Pratik Vyas, a regular commuter waiting for a hybrid bus on Monday, said, “The police is not there which is why the autos are creating a mess here. They just want to force commuters to take an auto instead of a bus.”

Among other buses, the Brihanmumbai Electric Supply and Transport (BEST)-introduced hybrid buses, too, have to wait for a long time due to the traffic.

Another commuter waiting at the stop said, “Even if I want to take a hybrid bus, due to the chaos and delay, I have to forcibly change the mode of transport as nobody wants to get delayed at work.”

This reporter had tweeted to the Mumbai police handle about the problem, in response to which, police personnel were seen regulating the traffic at the spot during the evening hours.

The tweet also elicited responses from aggrieved commuters. Asif Hameed, a commuter, said, “It’s a common thing out there and till now, no one has decided to resolve the issue. It looks like no one wants to find a solution to it.”