More than 2,000 commuters travel daily from the Bandra terminus to the diamond market in Bandra-Kurla Complex (BKC). 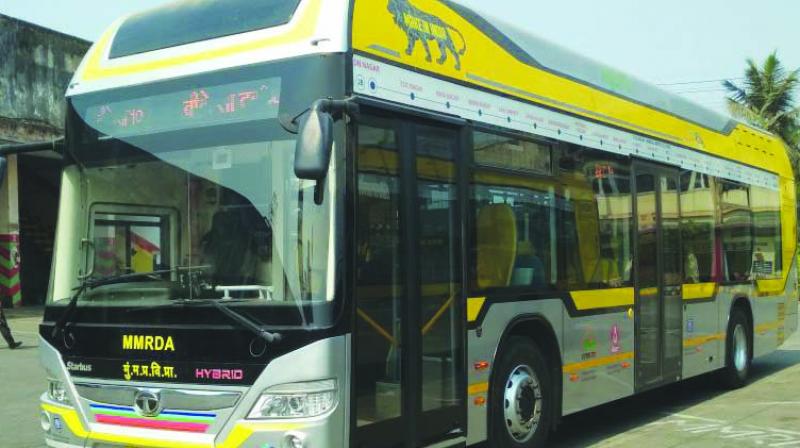 The fare on local routes within BKC vary between Rs 16 and Rs 26.

Mumbai: The Brihanmumbai Electric Supply and Transport (BEST), which recently introduced the electric-run hybrid buses, has till now collected nearly Rs 4.5 lakh revenue through them. Within a week of the launch of these buses on March 16, an average 3,000 Mumba-ikars began using them on a daily basis.

More than 2,000 commuters travel daily from the Bandra terminus to the diamond market in Bandra-Kurla Complex (BKC). The BEST earns close to Rs 50,000 every day through this route. BEST officials are claiming that the response has been overwhelming in the first week itself and that the ridership is expected to soar in a few months.

The Mumbai Metropolitan Region Development Authority (MMRDA) last week gave a total 25 hybrid buses to the BEST to take charge of operations of these buses. Chief minister Devendra Fadnavis inaugurated the buses on March 16, and so far, the BEST has managed to earn more than Rs 80,000 per day from the hybrid rides. A BEST spokesperson said, “The response has been good so far, and we are expecting more passengers in the coming months.”

Meanwhile, commuters are satisfied with hybrid rides. “The ticket price is reasonable and one gets a comfortable ride. They are better than the air-conditioned (AC) buses that were introduced earlier,” said Praveen Unkawane, a daily commuter.

The buses possess facilities such as WiFi, USB connections, FM radio etc. The buses provide point-to-point service from BKC to Borivali, Mulund, Thane and Kharghar. Also, there are local shuttle services within BKC. The buses run on diesel and electric power, and were purchased under the MMRDA's initiative to promote clean fuel.