Students gear up for varsity polls after 1994

Student elections were banned in Maharashtra since 1994, after violent activism led to the killing of a student leader in 1992. 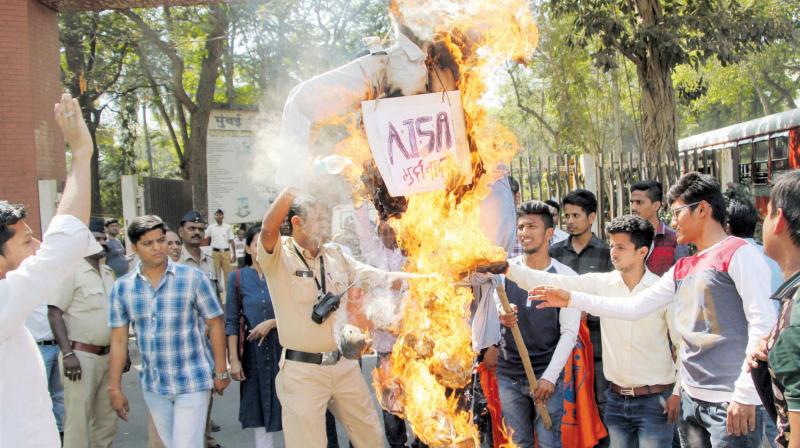 Student unions of various parties are looking to create grounds for the upcoming student polls.Delhi University

Mumbai: In the backdrop of the protests being organised against Delhi University’s Ramjas College inviting Umar Khalid, a JNU student for a seminar who was charged with sedition last year, student wings and unions of several political parties have started heating up the university level politics ahead of first student elections in the state universities after 1994.

Several protest are being organised in several educational institutes of the state, a move that could be the first attempt by student unions to pull up crowds and followers post the amendment in the Maharashtra Public University Act, 2016.

Few days ago, there have been clashes among student unions. On Saturday student members of Akhil Bharatiya Vidyarthi Parishad (ABVP) burned an effigy of All India Students Association (AISA) who supported Ramjas College at Mumbai University’s Kalina campus.

The issue also led to arrest of 12 students as clash erupted between ABVP and Student Federation of India (SFI) at Savitribai Phule Pune University on Friday. Further on Monday, SFI has organised protests in Mumbai against ABVP.

Nilu Damle, political analyst, said, “All the students unions are obviously trying to rake up this issue that would help them build up ground in the upcoming university elections. This type of atmosphere was seen in the 1960’s and 1970’s. This may or may not disturb the functioning of educational institutions.”

Student elections were banned in Maharashtra since 1994, after violent activism led to the killing of a student leader in 1992.

It is said to change in the next academic year when the new University Act comes into play, allowing student elections in the state.

Meanwhile, Rohit Chandode, secretary, ABVP Mumbai, “We are not doing this to build ground for upcoming university elections. We will protest against anti-national elements throughout all the colleges.”