Commuters turn up in large numbers

Despite holiday, hundreds of elated Mumbaikars travel on AC train to ‘witness history’. 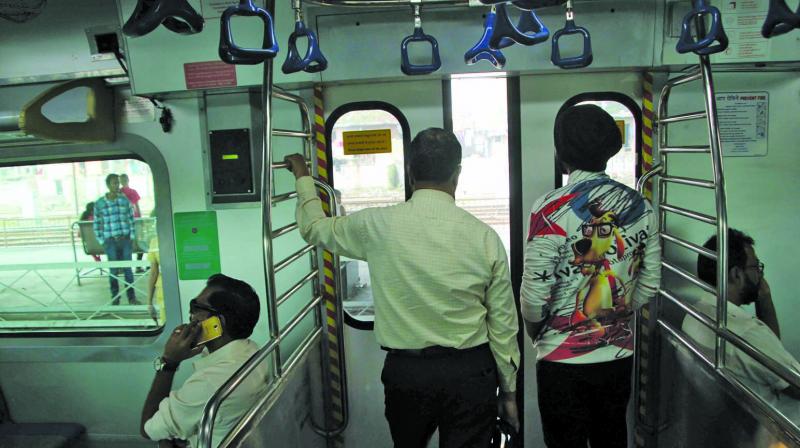 Western Railway (WR) commuters were excited and many actually planned the morning of their public holiday around the AC local. (Photo: Mrugesh Bandiwadekar)

Mumbai: In a fitting Christmas gift to Mumbai, the country’s first local air conditioned suburban train commenced its services on Monday, running from Borivali to Churchgate and fulfilling the long awaited dream of lakhs of Mumbaikars who travel that route everyday.

Western Railway (WR) commuters were excited and many actually planned the morning of their public holiday around the AC local. Most commuters had a very positive feedback on their journey and said that they won’t mind taking a monthly pass for the route as they found the cooling inside the AC satisfying. Many commuters could be seen taking selfies.

A couple, who has been together for more than 35-years and are residents of Kandivili, read about the inaugural journey of the AC local from Borivali at 10.30 am and they ensured that they made their way to the station together to “witness history”. Kamla Jajria (68) and Jairaj Jajria (72) were nattily dressed and truly looked enthusiastic about the ride. Kamla, the more talkative of the two, said, “We get up early like all oldies and my husband was reading the paper and came hurriedly to tell me that I should get dressed to go Borivali station and caught a rickshaw from Kandivli station.” Dressed in a silk off-while saree and oozing old world charm, Kamla said, “I think we both are blessed to live long and healthy lives and are glad to see the first AC local train in our lifetime.”

Other commuters like Chandan Kumar too read the news in the morning and made his way to the station along with his wife Priyanka and daughter Prachi. “Today is a holiday from work and I thought I would take my wife and my daughter for an outing when I read the news in the morning.” A resident of Borivali, Chandan felt that its better than spending the day cooped up at home or visiting an overcrowded mall. “I think everyone goes to malls in their area during such holidays. I think I am letting my family be a part of history. One day when people look back to the pictures of the AC train’s first ride, we will be in one of them.”

Commuters like Himanshu Bakshi said that it took the railways more time then they promised, but all was forgiven once he took the ride in the train and was blown away by the ride. “It was such a great experience. The AC and the fan was on and I really don’t mind riding in this train from Borivali everyday, I will buy a monthly pass for the travel and don’t mind shelling out the odd `1,700,” he said.