According to Mahajan, the least possible use of hard cash for transactions of smaller amounts is the need of the hour to curb black money. 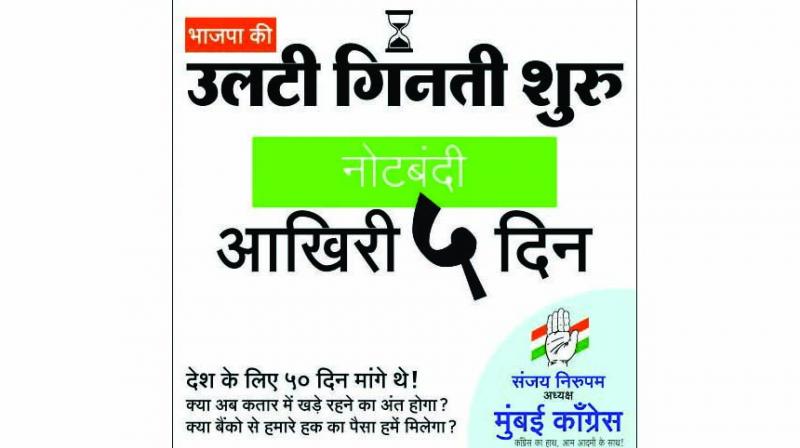 The Congress is all set to counter the Bharatiya Janata Party (BJP) with the hoarding that it is putting up in the city.

Mumbai: The Bharatiya Janata Party’s (BJP) youth wing, in a bid to deal with the flak it has been receiving from the common man over demonetisation, has asked every volunteer to approach 10 people and teach them how to operate smartphones in order to make cashless transactions.

Poonam Mahajan, the national president of the Bharatiya Janata Yuva Morcha (BJYM), the party’s youth wing, issued a statement about demonetistion, stating, “For nationalists, it’s currency exchange. For black money hoarders, it’s note ban.” Ms Mahajan is also the Member of Parliament from Mumbai North Central. The programme, named ‘Digital Kranti for Good Governance’, is a nationwide event, and was launched on December 25.

A statement released by Ms Mahajan read, “On the occasion of the birthday of former Prime Minister Bharat Ratna Shri Atal Bihari Vajpayee, the BJYM is conducting a nationwide programme ‘Digital Kranti for Good Governance’. During this programme, BJYM volunteers will educate and train common people around them about the use of mobile banking for transactions of smaller amounts. Each volunteer will educate at least 10 people.”

In this programme, people will be taught the use of mobile banking in day-to-day chores. According to Ms Mahajan, the least possible use of hard cash for transactions of smaller amounts is the need of the hour to curb black money. A senior leader from the party claimed that, for a long time, people had been claiming that the BJP workers were missing during the whole demonetisation hullabaloo and this was an attempt to show that the party is on the field too.

Congress keeping track of time:
The Congress is all set to counter the Bharatiya Janata Party (BJP) with the hoarding that it is putting up in the city. The hoarding is a countdown to December 30, the last day for exchanging old currency notes of Rs 500 and Rs 1,000. The Congress claims that situation won’t change after December 30 and demonetisation had impacted the common man negatively.