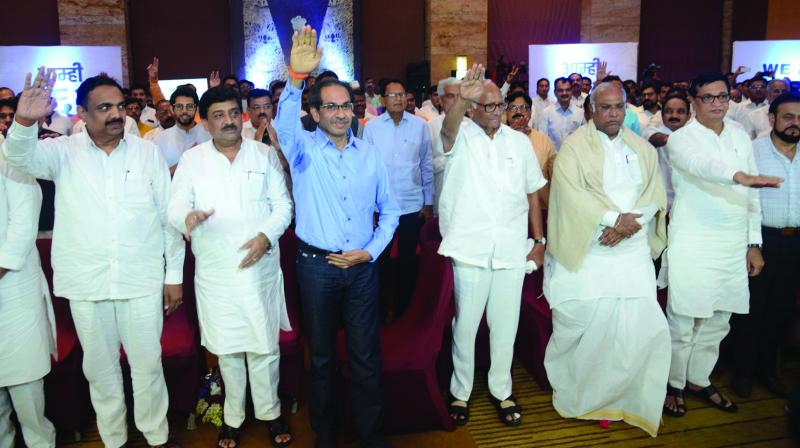 Mumbai: The Shiv Sena, Congress and the Nationalist Congress Party (NCP) on Monday evening conducted a joint “parade” of 162 MLAs supporting their alliance government at a five-stall hotel in Mumbai. With this show of strength, the three parties, which were beaten by the BJP in forming the government in Maharashtra, stepped up their efforts to prove that they have the majority to form the government.

Earlier in the day, they also submitted a letter signed by 162 MLAs to governor Bhagat Singh Koshyari which said that they parties should be invited to form the government if the Bharatiya Janata Party (BJP) fails to pass the floor test in the Assembly.

The “parade” was held at Grand Hyatt hotel, Santacruz, in the presence of Shiv Sena leader Uddhav Thackeray, NCP chief Sharad Pawar and Congress’ Mallikarjun Kharge. All the MLAs were asked to stand up and take a pledge while invoking the Constitution that they would not fall prey to any inducements by the BJP.

The Shiv Sena and Congress’ MLAs were brought to the hotel in air-conditioned buses at around 7 pm, and were joined by NCP legislators who have been staying at the hotel. Apart from 51 NCP legislators, Shiv Sena’s 56 MLAs and the Congress’ 44 legislators, 11 MLAs from smaller parties and Independents also attended the event.

“I swear that under the leadership of Sharad Pawar, Uddhav Thackeray and Sonia Gandhi, I will be honest with my party. I won’t be lured by anything. I will not do anything which will benefit the BJP,” all MLAs pledged together.

Speaking at the “parade”, Mr Thackeray said, “The BJP will have to make way for the Sena-NCP-Congress alliance government in Maharashtra. The strength of our alliance cannot be captured on any camera lens. We have arrived — clear our way. We are not here for just five years. We are starting from Maharashtra, and then we will move ahead.”

NCP president Sharad Pawar also addressed the MLAs and assured them not to worry about Ajit Pawar. “There will not be any problem in proving our majority. The one who is suspended from the party cannot give any orders. On the day of the floor test, I will bring more than 162 MLAs. This is not Goa, this is Maharashtra. I will take personal responsibility to ensure no MLA loses Assembly membership for voting against the BJP,” he said.

Earlier in the morning, a joint delegation of the three parties submitted a letter to the governor, staking their claim to form the government in the state. “Once Mr Fadnavis fails to prove his majority in the floor test, Shiv Sena’s claim for government formation should be considered,” the letter read.

NCP leader Jayant Patil alleged that the current government in Maharashtra has been formed on the basis of “false papers and documents”.

“We are in a position to bring 162 MLAs before the Maharashtra governor at any given time,” he said. He was accompanied by Shiv Sena’s Eknath Shinde and Vinayak Raut, Congress’ Ashok Chavan and Balasaheb Thorat, and Samajwadi Party chief Abu Azmi, among others.

Mr Shinde said that a letter of support from the 162 MLAs was submitted at Raj Bhavan. “In a democracy, only the majority number holds importance. We want the minority government formed on November 23 to resign as it can’t prove its majority. Those with a majority should be given an opportunity,” he said.

The BJP, predictably, ridiculed the efforts of the three parties to stake claim to form the government and parade their MLAs before the media.

BJP leader Ashish Shelar said the letter submitted by the parties to the governor was “bogus”.

“It is a bogus letter as technically Ajit Pawar is still the leader of the NCP’s legislature wing and he has extended support to the BJP. The Congress has still not elected its legislative party leader and Shiv Sena has named its chief minister,” Mr Shelar said.

BJP leader and Union minister Raosaheb Danve also said that the letter had no value. “The process of forming the BJP government is already on. Mr Fadnavis will prove his majority comfortably on the floor of the Assembly,” he said.

Commenting on the parade, Mr Shelar said, “An identification parade is carried out to identify criminals. Today, Congress, Shiv Sena and NCP paraded their legislators like criminals. They have not only insulted the legislators, but also the people who elected them as their representatives.”

Mr Shelar added that Sena founder Balasaheb Thackeray’s legacy was dented when Aaditya Thackeray took the pledge to be loyal to Congress president Sonia Gandhi. “It was an exercise carried out by leaders whose confidence has been shaken only to reassure themselves,” Mr Shelar said.