Nine years on, Omble’s family asks, ‘what has changed?’

Despite the passage of time, the three women, who live in Worli Police camp, are struggling to come to terms with their loss. 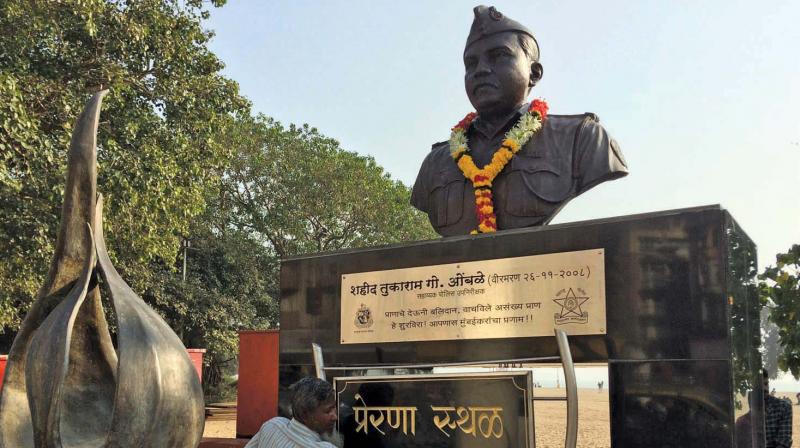 Tukaram Omble’s deed has been memorialised by a statue in Chowpatty.

Mumbai: Nine years may have passed, but the family of Tukaram Omble still looks expectantly at the door, hoping that he will walk in after work, like he used to. Omble an assistant sub-inspector with the Mumbai police, lost his life in the 26/11 terror attacks on the city while trying to capture Ajmal Kasab, but was shot dead by him at point-blank range.

Omble’s wife Tara and his two daughters Vaishali and Bharti always feel that he will step into the house, hang up his cap in its earmarked space, and greet them with a smile like he did everyday.

“We know that he won’t ever come, but there is this hope that one day everything will just like before. That he will be on the other side of the door,” says Vaishali.

Despite the passage of time, the three women, who live in Worli Police camp, are struggling to come to terms with their loss. Vaishali is proud of her father’s sacrifice but is unhappy about the fact that nothing has changed much.

“For how long will the police or armed forces personnel continue losing their lives in the name of supreme sacrifice?” she ask. Vaishali is currently taking tuitions and keeping herself busy so that she does have to deal with the loss of her father.

Omble was the first security personnel who engaged Kasab in a physical tussle in order to pin down the terrorist. It was after the tussle between the two that Kasab was caught by other officers and placed under arrest.