‘Tired’ driver was trying to park outside station but overshot area. 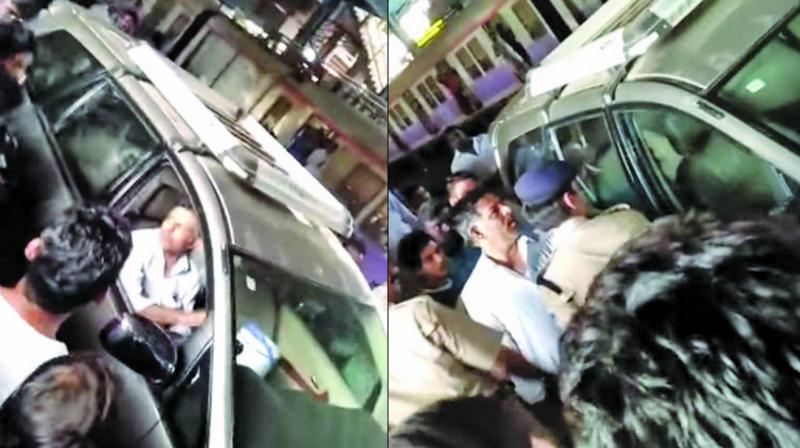 A video grab shows the man in his Innova car on platform no 6 at Andheri station.

Mumbai: Commuters on the Harbour line platform no 6 of Andheri were in for a shock on Friday afternoon when instead of the train, they spotted a grey Innova chugging up the platform. As it turned out, the “sleep-deprived” driver of the car was trying to park the vehicle outside the station but did not realise he had overshot the area and clambered up the ramp leading to the platform.

The Andheri Government Railway Police (GRP) was still registering an FIR of the incident when this paper was going to print. Senior police inspector Manish Rathod said, “We are yet to register an FIR as the RPF is currently engaged in the process of handing over the case to us.”The man was identified as one Rajesh Yadav and is a resident of Santa Cruz. “The driver of the vehicle was extremely tired and under tremendous pressure,” said Mr Rathod.

The incident occurred around 3.30 pm when Yadav, who works for Gammon India, was returning to Andheri after dropping his employer at the airport. “The driver has only said that he works for Gammon India and we have contacted the owners. We will know the details by morning,” said Mr Rathod. An official on the condition of anonymity said, “When you look at platform no 6 on the West side of the station there is some construction work going on. There was a small space there and Yadav thought that he would be able to squeeze in the car there. However, as it was an Innnova, which is longer in length than most cars, while reversing the front wheels clambered up the small ramp between the road and the platform and ended up on the platform instead.”

The video shows a visibly enervated Yadav stepping out of the car bewildered at what had just happened. Commuters and RPF personnel soon surrounded the vehicle registered as MH 06 AF 74 69 and begin yelling at him for causing disruption.