The fire brigade estimates that the fire completely gutted a total of 250 or more shops. 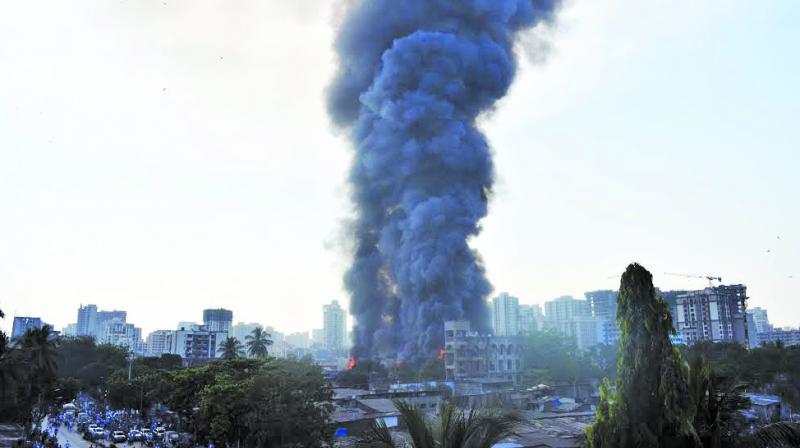 A major fire broke out at a furniture market in Oshiwara area of Jogeshwari on Friday. No casualties were reported in the blaze. (Photo: Rajesh Jadhav)

Mumbai: A major fire broke out at a furniture and plastic market in the densely populated area of suburban Jogeshwari around 12.30 pm on Friday. While no casualties or injuries were reported, it took the Mumbai fire brigade over nine hours to bring the fire under control.

The fire brigade pressed 10 fire tenders to the spot, including two water tankers, and managed to confine the fire to a small plot in the market only by 8.30 pm. The cause of the fire is not known, and at least two cylinder blasts occurred owing to the fire, sources in the fire brigade said. The market consists of furniture shops, plastic godowns, and garages. The fire brigade estimates that the fire completely gutted a total of 250 or more shops. There are no houses in the vicinity.

Deputy chief fire officer of the Mumbai fire brigade, Keshav Hivrale, who was present at the spot said, “I saw two LPG cylinder blasts during the fire. There was at least one other chemical cylinder blast, and I suspect there were more than one chemical cylinders, judging by the smell emanating from the fire.” Mr Hivrale confirmed that there were a large number of plastic and furniture shops, which magnified the fire. The cylinder blast further enabled the spread of the fire to adjacent shops. An official of the fire brigade said, “We managed to confine the fire to an area of 500 square feet by 8.30 in the night, but it took us another couple of hours to completely douse the fire.”