Born on 26/11 at Cama Hospital, Tejaswini found out the reason behind her name only last year. 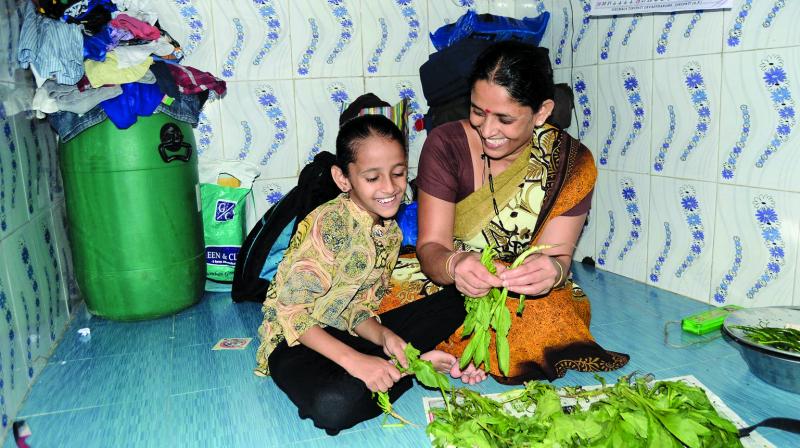 Goli at home with her mother. (Photo: Shripad Naik)

Mumbai: When bullets were flying thick and fast at the Cama & Albless Hospital on the night of November 26, 2008 in Mumbai, a girl was born at the hospital. Her parents aptly named her “Goli” (bullet) in memory of the bullet shots fired. While birthdays are a happy occasion for many, especially children, for eight-year-old Goli Chavan, it reminds her of the macabre terror attacks in which 166 people died and over 300 were injured. For Goli’s mother Viju Chavan, “happiness and sorrow” go hand in hand. Her bundle of joy was born amidst bullets being fired outside the hospital by terrorists Ajmal Kasab and Abu Ismail Khan.

Call it a strange coincidence, but Ms Chavan’s younger daughter Jayashree was born on February 13, 2010, the day of the German Bakery blast, Pune. “Both my girls were born on days of despair. We are religious and so we consulted a pandit, who said we should not worry. We hope Goli proves to be a shining star like she was on the day she was born,” said Ms Chavan.

Goli, whose official name is Tejaswini, learned the secret behind her name only on her seventh birthday last year. “She came home crying a few days before her seventh birthday because some children in the slum called her ‘AK-47’ and ‘Pakistani’. She wanted to know why her name was Goli,” said Ms Chavan, who works as a domestic help. It was then that Ms Chavan told her daughter that she was one of the “happiest memories” that people have of that night. When asked about her name, the shy girl tried to hide behind her father Shyamu Chavan. “She is generally talkative but shy around strangers,” he said.

Recollecting the 26/11 night, Ms Chavan said, “I had gone into labour and taken to the hospital at 8 pm on November 26. By 10.30 pm, the doctors said I would deliver at any moment. Shyamu, who had gone out to buy medicines came rushing in saying somebody was firing outside the hospital.” It was the sharp mind of the hospital staff that saved many lives. After hearing the gunshots, the staff locked the labour ward. In fact, it was the staff at the hospital, who asked the parents to name their daughter “Goli”.