Despite receiving the Shaurya Padak for his brave deed, Bavdhankar finds it difficult to revisit Girgaum chowpatty without being unsettled. 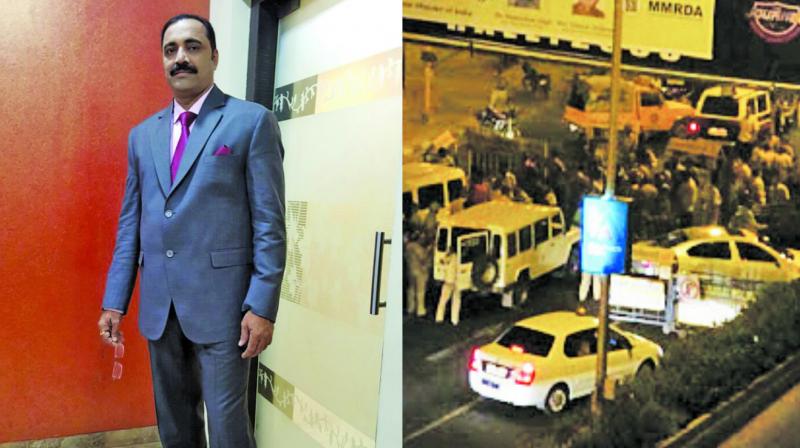 PI Hemant Bavdhankar had shot terrorist Abu Ismail Khan who was with Ajmal Kasab in the Skoda car at Girgaum on November 26.

Mumbai: For Hemant Bavdhankar, a police inspector with the JJ police station, his first encounter at Girgaum chowpatty in the intervening night between November 26 and 27, 2008, is etched in memory.

Mr Bavdhankar shot terrorist Abu Ismail Khan, the man who was steering the hijacked Skoda car with terrorist Ajmal Kasab sitting next to him. “This was my first encounter using my service pistol and the last till now. I shot Abu Ismail Khan, who was steering the car, which also had Ajmal Kasab,” said Mr Bavdhankar, who was an assistant police inspector then and was present at Girgaum chowpatty on the night of 26/11 along with his team that comprised martyred constable Tukaram Ombale and 15 others. Mr Bavdhankar’s contribution was enormous, but so is his psychological scar.

Despite receiving the Shaurya Padak for his brave deed, Mr Bavdhankar finds it difficult to revisit Girgaum chowpatty without being unsettled. “I am now with the JJ police station and chowpatty is not under my jurisdiction. However, after the incident I avoid going to the place where the incident took place as it disturbs me psychologically,” he said.

Recounting the incident in detail, Mr Bavdhankar said that it was around 12.15 am on November 26, 2008 when he got a wireless message informing him that terrorists had hijacked a Skoda car and were moving towards Marine Drive and were later spotted at Girgaum chowpatty.

Mr Bavdhankar had lunged towards the driver of the car before shooting him to death. “At the time of shooting with my service pistol, I was not sure if I would be able to do it, as it was my first encounter. There was no time left and while my colleagues were busy retaliating, I hit the trigger and targeted Ismail on his head,” he said.

Mr Bavdhankar was posted with the D.B. Marg police station at that time. While his colleagues kept firing at Ismail to distract him, Mr Bavdhankar fired two rounds around Ismail’s back and fired a third round on his head.  “At the time of shooting, the only thing I recalled was the scenes from my training days where we were instructed to fire two rounds as warning before firing a third to kill the person. I fired two rounds around his back and further taking aim I fired the third round on his head. He slumped and the car lost control,” he said.

Mr Bavdhankar further said that after Ismail was dead, Kasab came out of the car pretending to surrender, with his AK-47 stuck between his legs. Assistant sub-inspector Tukaram Omble cornered him but Kasab started firing with his gun.

However, Omble managed to capture Kasab and overpowered him but in the process got killed. Other police officials managed to overpower him. “We were a team of 16 where my contribution was little and it would not have been possible to manage the two without the entire team as they were driving without any aim and firing randomly with their AK-47,” said Mr Bavdhankar.

While the police caught Kasab alive, it was 654 other witnesses, who gave statements in the special session court giving a rightful conclusion to the incident. Kasab’s death sentence was upheld by the Bombay high court in 2011 followed by the SC in 2012. Kasab was hanged to death on November 21, 2012 at Yerwada jail in Pune.