To protest the ED’s actions, irate party workers held protests across the state and a shut-down was observed in Baramati, Mr Pawar’s hometown. 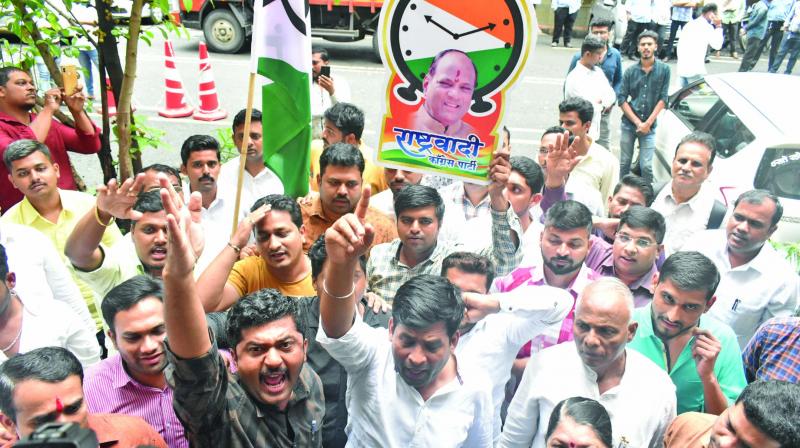 Mumbai: The Nationalist Congress Party (NCP) has decided to use the Enforcement Directorate (ED) case against its chief, Sharad Pawar, to galvanise party workers ahead of forthcoming Vidhan Sabha polls in the state.

The senior leader has, meanwhile, taken an agg-ressive stand, invoking the legacy of the 17th century founder of the Mar-atha Empire to defend hi-mself on Wednesday. “Maharashtra follows the ideology of Chhatrapati Shivaji Maharaj. We do not bow before the Delhi takht (throne),” the 78-year-old former chief minister said.

The NCP chief said he would visit the ED office himself on September 27 to seek the agency’s ‘hospitality.’  “I believe in the Constitution of Dr Babas-aheb Ambedkar and, hen-ce, will give all the information that I have related to this case… I will mostly be out of Mumbai for our Assembly poll campaign. The ED officials shouldn’t misunderstand that I am unavailable. Hence, I will go to the agency’s office in Mumbai and extend my co-operation,” he said.

The ED has filed a money-laundering case against Mr Pawar, his nephew Ajit Pawar and 70 others in connection with the alleged `25,000-crore scam involving the sanction of loans by the Maharashtra State Coop-erative Bank (MSCB).

The NCP chief, however, said that he has never been associated with the bank — either as a member or director. “I have never been part of the bank’s decision-making process,” he said.

Alleging vendetta, the Rajya Sabha MP said, “The development has happened when the polls are round the corner. So the people understand what is up.”

The veteran leader said he was arrested only once in his life, during a rally from Jalgaon to Nagpur in 1980, after he led a protest march over an agrarian issue.

According to political observers, the ED’s actions could prove a blessing in disguise for the NCP, which is in dire straits due to a series of desertions of its prominent leaders such as Satara MP Udayanraje Bhosale, a direct descendant of Shivaji; former Maharashtra unit president Bhaskar Jadhav; former ministers Ganesh Naik, Sachin Ahir and Jaydutt Kshirasagar; and MLAs Shivendrasinh Bhosale, Sandip Naik and Vaibhav Pichad, to name a few.

To protest the ED’s actions, irate party workers held protests across the state and a shut-down was observed in Baramati, Mr Pawar’s hometown.

Workers of the NCP’s youth wing also staged a protest outside the ED office in Mumbai.