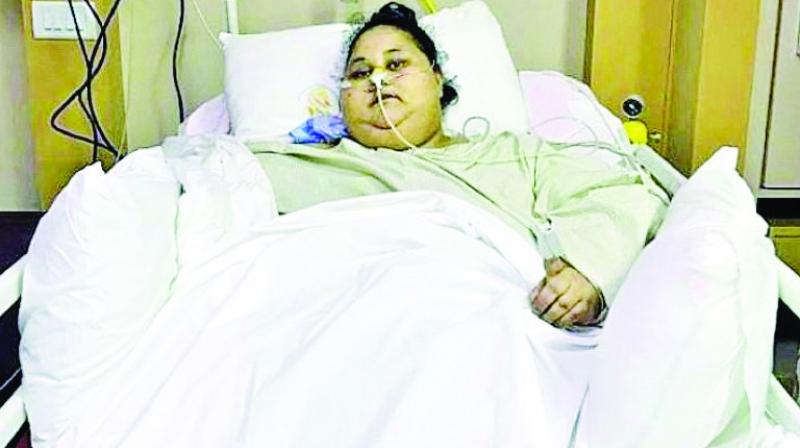 Eman Ahmed during her treatment at Saifee Hospital.

Mumbai: Following Egyptian national Eman Ahmed’s passing away at around 4.35 am on Monday in Abu Dhabi, renowned bariatric surgeon, Dr Mufazzal Lakdawala — who, along with his team at Mumbai’s Saifee hospital, had provided weight-reduction treatment to Ahmed, formerly the world’s heaviest woman, from February to May this year — refrained from speaking to the media.

However, he paid his last respects to Ahmed by tweeting: “Inna-lillahi-wa-inna-ilayhi-raji-un. You shall always remain in my thoughts and prayers Eman Ahmed. Shall forever remember her smile RIP”.

While Dr Lakdawala was unavailable for comment, Dr Shehla Shaikh, the endocrinologist at Saifee hospital who treated Ahmed, said, “It’s utterly sad news. She was responding well to the treatment, which is why she lost weight.”

“We did our best to treat Ahmed and that’s the reason she was able to take the flight ordeal and land in Abu Dhabi. She went via cargo plane. That itself was a recovery,” said Dr Shaikh.

Another senior hospital official said, “Ahmed was our responsibility and whatever the hospital could have done for her, we did. Now we have no clue what kind of treatment was given to her. We had almost created a special room for her and not only our doctors but all our medical staff was busy serving her with compassion. She too had started responding.”

After a bitter discussion between Ahmed’s sister and Dr Lakdawala, Dr Aparna Govil Bhasker took to Facebook to express her anguish over the fiasco and resign from the responsibility of caring for Ahmed.

Case timeline
December 5, 2016: Eman’s sister via Twitter contacted external affairs minister Sushma Swaraj, asking for help; Dr Lakdawala was requested via Twitter to get her a medical visa as it could not be got through the normal process.
December 6, 2016: Ms Swaraj granted medical visa to Ahmed.
February 11: Eman travelled from Egypt to Mumbai.
March 7: She underwent first surgery, lost 100 kg.
April 24: Eman’s sister Shaimaa alleged she was in pain and frequently fell unconscious.
April 25: 12 out of the 13 doctors treating Eman resigned from responsibility of her treatment.
April 29: Procedure to move Eman from Mumbai to Abu Dhabi initiated.
May 4: Eman left for Abu Dhabi
Sept. 25: Burjeel hospital informed of Eman’s death