Fishermen stated that in Maharashtra, around 50 per cent of the total pomfret catch constitute juvenile fish this year. 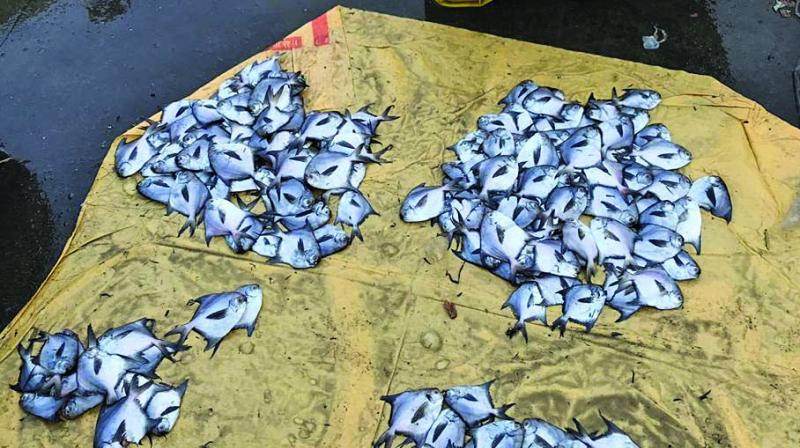 Small-sized pomfrets at a fish market.

Mumbai: A worrying trend of fish landings after the monsoon has emerged as Koliwadas were inundated with juvenile pomfrets. This week, the fish markets of Ferry Wharf in Dockyard road and Sasoon dock were seen full of small sized pomfrets. Fishermen and marine conservationists have raised concerns over the impact of extensive catching of this species of fish before they attain full gro-wth, which may result in decline in their population.

Fishermen stated that in Maharashtra, around 50 per cent of the total pomfret catch constitute juvenile fish this year. This is larger than the year 2018, when the juvenile stock was 20 per cent of the total catch. “The larger pomfrets are sold to seafood restaurants and for export, approximately 50,000 kilograms of the smaller ones are being brought in MMR’s harbours on daily basis. This is apart from Thane and Palghar,” said Ganesh Nakhwa, president of Purse Seine Net Fisherman Welfare Association.

The landing of pomfrets in Maharashtra has reduced drastically in the last 25 years. The annual landing in 1980s was aro-und 20,000 metric tonnes, according to the Central Marine Fisheries Resource Institute (CMFRI). In 2018, the landings were reduced to mere 3,000 metric tonnes. According to Vinay Deshmukh, former CMFRI scientist, average pomfret size in 1980s was 300 gm that has dropped down to 50 gm and below.

“This is due to overfishing in doll nets, trawl nets and gill nets. Overfishing of pomfrets is also due to huge demand and emphasis on this species in commercial consumption. Aw-areness is needed among consumers and restaurateurs to highlight other economical and abundantly available white-flesh fish for eating like groupers, snappers, catfish,” said Swapnil Tandel, a marine researcher.

“Another solution could be to make their consumption seasonal, unlike now where pomfrets are consumed throughout the year,” said Mr Nakhwa.

The CMFRI had recommended that the sale of fish with size lesser than the prescribed limit should be banned.