Protest called off to prevent violence from seeping in

The police are now in the process of registering cases of rioting against unidentified persons. 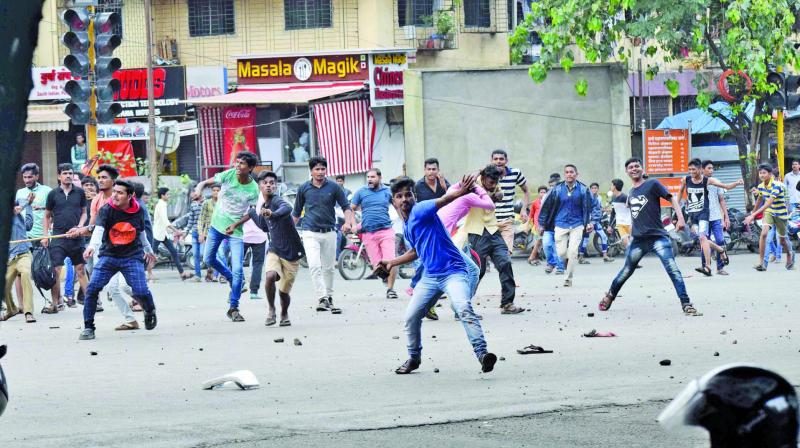 Ugly side of the stir was witnessed at Kalamboli junction. (Photo: Deepak Kurkunde)

Mumbai: Maratha Kranti Morcha (MKM) conveners abruptly called off protests in Mumbai around 2 pm on Wednesday. They claimed they felt that some elements were trying to use the occasion to spread violence even though they had themselves planned only a peaceful agitation to seek reservation for their community.

According to sources, some protests took place in areas where the MKM had not planned any protest at all. The police are now in the process of registering cases of rioting against unidentified persons.

The investigators suspect the involvement of individuals from the slums of Wagle Estate who pelted stones in the Nitin Company area even after the state-wide shutdown was called off.

The ugly side of the stir was witnessed at Kalamboli junction where the Mumbai Pune-Expressway begins. The protesters assembled in large numbers and started burning tyres. “We tried to contain the crowd, but they resorted to violence and started pelting stones. We used tear gas shells and fired few rounds in the air to scare the crowd,” said a police officer from Navi Mumbai.

In Thane, the Nitin Company junction on Ea-stern Express Highway was worst hit after notorious elements targeted pol-ice after the morcha was called off. Two policemen Nilesh More and Ashok Bhandare sustained injuries to their head and faces.

“The accused were residents of slum pockets in Wagle Estate. We are in the pro-cess of identifying them,” said an officer of Thane police.

Meanwhile, Narendra Patil, a leader of the Maratha community, said that there were a few unknown faces in the agitation. “Out protest in Mumbai is successful. But we are unaware of a few people participating in it. So, there is a serious doubt among our activists that these people were planted to defame our agitation,” said Mr Patil.